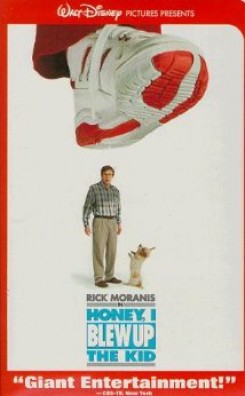 Honey, I Blew Up The Kid

In this sequel to Honey, I Shrunk the Kids, we find the Szalinski family living in Vista Del Mar, Nevada, a suburb of Las Vegas, where Dad, Wayne, works in a laboratory. Wayne's a prolific inventor and the Szalinski home is testament to that, as his clever gadgets are seen everywhere. Mom, Diane, is taking their oldest child, Amy, away to college, leaving Wayne and their teen son, Nick, at home to care for their toddler, Adam with the assistance of the family dog, Quark. Wayne works at Sterling Laboratories, which has licensed Wayne's shrinking device. The elderly Chairman of the Board at Sterling is Clifford Sterling, but there is a plot to oust him by Dr. Henderson, an ambitious and not entirely ethical executive with the lab. All efforts at the lab are focused on finding a way to reverse Wayne's shrinking process and enlarge things, but one experiment after another fails. When Wayne has a breakthrough idea on a Saturday, he rushes to the laboratory to work on it, taking Nick and Adam with him. Wayne is unaware that Adam has crawled into the work area during a key point in the experiment, but later at home, after Adam has been near the microwave oven, he begins to grow. When Wayne realizes what has happened, he tries to smuggle the seven foot toddler back into the lab to reverse the process. But Henderson denies him access and removes him from the project. Wayne drives home and breaks the news to Diane who has returned. They try to keep their big problem a secret from the neighbors, but Adam is in his "terrible twos" and is wrecking the house. After Adam is exposed to television rays, he grows again and gets out of the house, throwing the neighborhood into a panic. It seems electromagnetic waves activate the growing process and the adorable giant, now over fifty feet tall, is headed for the bright lights of downtown Las Vegas!

The film opens with Quark, the family dog getting the morning mail from the mail box and bringing it in to the family. In this scene, the dog ran out the door, running A to B, pulling a lever that dropped the mail. The dog picked up the mail and then ran the same A to B in the opposite direction back to the house. To achieve this, one trainer released the dog at the door, as another trainer called him to the mail box and cued him to pull the lever and then pick up the mail. The trainer at the door called the dog back to the house. Quark is seen in numerous other reaction shots which were achieved by the way of verbal cues from his trainer. Other dogs seen primarily as background in the film, were privately owned pets.