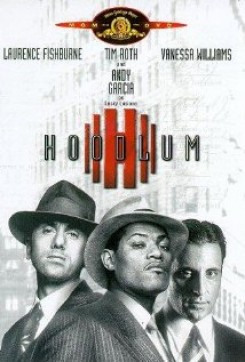 Hoodlum is a drama set in Harlem 1934 and is about an illegal lottery, known as a numbers operation. Madame Queen has been running a peaceful numbers operation in Harlem for many years, which helped employ many black people during the depression. Dutch Schultz wants to take over the business any way he can, but Madame Queen's main number runner and bodyguard, Ellsworth "Bumpy" Johnson, takes over the business with a vengeance when the Queen is arrested. A lot of blood and lives are lost in the battle with Dutch , but Bumpy finally has Dutch killed and the war in Harlem is over.

In a few scenes a small dog is seen being hand fed or petted as he sits on an actor's lap. In another scene, a couple of dogs are seen in the background being walked on leashes. There are a few scenes where horses are seen in the background, either pulling carriages or walking along the street. Also, two policemen are seen riding their horses down a street. In another brief scene, two horses are seen outside a church as they wait to transport a casket to the cemetery. Other animal action consists of pigeons flying in the sky, however, these birds were natural to the location.