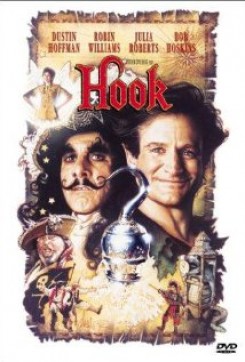 Hook is a magical and colorful fantasy filled with humor and insights that will captivate children and adults alike. The story begins in the present where an aging and yuppified Peter arrives in London with his wife, Moira and their children, Maggie and Jack. They're staying at the home of Moira's grandmother, Wendy, now 92 years young. Wendy is disturbed at the changes she sees in Peter who has become a rather avaricious attorney, insensitive to the needs of his wife and children. Peter is host at a testimonial dinner given as a tribute to Wendy, who has been the benefactor for hundreds of orphans. While everyone is at the dinner, Captain Hook kidnaps Maggie and Jack. Hook is seeking retribution on Peter for cutting off his hand so many years ago. When Peter arrives home and makes the terrible discovery, he calls in the police, but they are stumped. Peter is beside himself with remorse, and has no recollection of his former life until late at night, when Tinkerbell appears to fetch Peter back to Never Never Land to save his children. Peter leaves with Tinkerbell, but he's forgotten everything. He can no longer fly, and before he can recapture the Peter of his youth, he must recapture his imagination. Hook, also known as the sleaziest sleaze of the seven seas, seeks the ultimate revenge which is to turn Peter's children against him. The ensuing adventures as Peter spars, physically and verbally with the villainous Hook, in an effort to reclaim not only his children, but also his lost values, makes top notch entertainment for the entire family.

No story of Peter Pan would be complete without a large, lovable dog named Nana. In Hook, Nana is played by an English Sheepdog. All action is basic A to B. For the balance of animal action, a great variety of domestic and exotic animals were filmed such as goats, chickens, parrots, macaws, flamingos, storks, cockatoos, penguins, monkeys, snakes, insects and a beaver. All of these animals appear at various times as part of the Never Never Land atmosphere. They have little or no action. Dead animals seen hanging in a village marketplace were fake props.