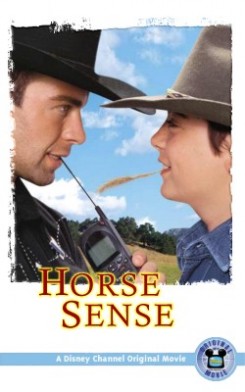 Horse Sense is a film about two boys one from Beverly Hills, the other from Montana, and how they learn the true meaning of family.

The film is centered around a ranch in Montana therefore horses are used throughout. There is a scene a roping and branding scene, which involves calves. This scene was shot in cuts using stunt doubles. The branding segment was simulated using a cold iron and rigging under the calve which expressed steam when triggered. There is a scene where a horse is stuck in a small mud pit. This horse was prepped for the scene and stunt doubles were used when the actual pulling occurred. The horse was very comfortable with the scene and was completely washed down afterwards. For the scene with the bucking horse, a stunt double was used and a trained bucking horse. Trained riders were used for all stunts and most of the galloping scenes. Other animal action consists of a dog seen lying down, running from A to B., lying on a bed etc. For all of these scenes the trainer placed the dog on its mark and cued it with verbal and hand commands.