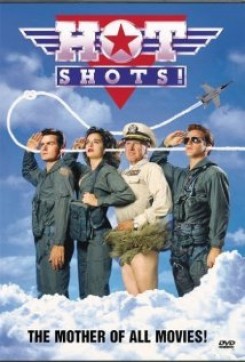 Hot Shots is a military spoof that parodies films from Gone With The Wind to Top Gun. Air Force Lieutenant Colonel Topper Harley is selected to fly in an elite fighter corps on a dangerous secret mission. He joins the corps after sitting out a suspension on an Indian reservation that is more than a little reminiscent of the one in Dances With Wolves. Other members of the corps are Kent, a self-obsessed pilot in competition with Harley for some of the glory and for a beautiful psychiatrist, Ramada. There's Dead Meat, a family man, and Wash-Out, a pilot with a slight disability...he's nearly blind. Their "cracker-jack" unit is headed by an addled admiral with a perfect record in the skies...went up 194 times, was shot down 194 times. This Naval air corps team, which more closely resembles the Keystone Cops, involve themselves in a variety of adventures, from ace flying to kinky sex.

In an opening sequence a flock of birds is seen flying across the sky. As a jet appears, the flock parts creating a path for the jet. This was accomplished with special effects and there was no mingling of real birds and planes. During the spoof of Dances With Wolves a herd of buffalo and a wolf are seen separately in different shots. There is no special animal action, they are merely there to create the proper atmosphere. A pet Chihuahua is nearly sat on in several scenes as he sits or dozes in a chair. The actors never actually sat on the dog, but cleared him by several inches and then the sound of the dog yelping was simulated. Ramada exhibits some very aerobic equestrian skills that involve her jumping from a tree branch into the saddle, then performing trick riding with the horse dancing, rearing and jumping. This scene was shot in cuts using a stunt double for the actress, a fake gag horse, and a trained horse. The stunt double mounted the gag horse which was a see-saw type of rig covered with hide and painted to match the real horse and operated by hand. A trained horse and expert rider performed the dancing, rearing and jumping. In a spoof of Superman flying through the night sky with Lois Lane, a dove lands on Superman's outstretched hand and refuses to leave. A real dove lands on the actor's hand and then the scene cuts to a fake dove that won't shake off. As a plane is taking off on the deck of a ship, a dog gives chase and barks at its wheels. In reality there was no plane, but just tires mounted on a hollow shell that resembled the bottom half of a plane. This contraption was pulled a short distance as the trainer called his dog to run and bark behind the wheels. When the very near-sighted Wash-out is awash with tears, his Coke-bottle glasses fill with tears and fish swim within the lenses. An optician made these glasses which were really two miniature fish tanks, open on top and stocked with several pigmy fish. Other horses and a cat are seen in brief vignettes.