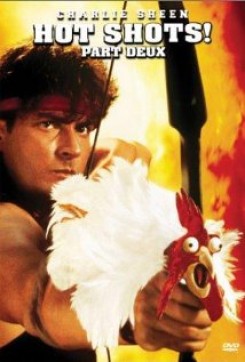 Hot Shots! Part Duex, a follow-up to the first Hot Shots, is the hilarious spoof of a government P.O.W. rescue mission. Topper Harley, the movie's hero, will lead an unlikely group of soldiers into a foreign land to rescue American prisoners of war and prevail over the country's leader, Saddam Hussein.

Animal action is comical and, for the most part, done with the use of fake animals. Saddam has a pet dog who is present in a few scenes doing simple action via his trainer's verbal commands. In one scene the dog runs up to an intruder and grabs him by the pant leg. The intruder takes a fire extinguisher and sprays the dog, freezing him, causing the dog to break into pieces. This scene was shot in cuts using a real and a fake dog. The real dog was trained to play tug of war with the actor's pant leg and followed his trainer's verbal commands to do so. Then the fake dog was attached to the actor's leg and sprayed with the fire extinguisher. Special effects were used to create the illusion of the dog falling apart. In a scene when Topper is trying to stop one of the enemies, he takes his bow and, being out of arrows, he reaches for the closest object, a chicken who is standing next to him. He takes the chicken, stretches it in the bow and fires, penetrating the fleeing man in the chest. This scene was also shot in cuts. The real chicken was placed by it's handler next to the actor and was only present when we see the chicken standing next to Topper. A fake chicken and special effects were used to achieve the remainder of this scene. In another scene, at one of Saddam's parties, a small dog is seen dancing on it's hind legs in a tutu. The dog was trained to stand on it's hind legs and turn in circles following it's trainer's hand and verbal commands with food as a reward. A rat is seen on an actor's shoulder as his pet in one scene. The rat was merely placed on the actor's shoulder by the wrangler and filmed standing there. A mouse is also present in one scene standing on a table. Again, the mouse was placed on the table by the wrangler and filmed. Other scenes involved an octopus landing on a woman's head, a worm on a hook flopping onto a man's hat, a snake pulled out of a tree by it's neck and twirled around a tree branch, and a fish served on a plate with it's eyes rolling, as if still alive, and then crawling away. All of these scenes were done with obviously fake and rubber animals and with special effects.