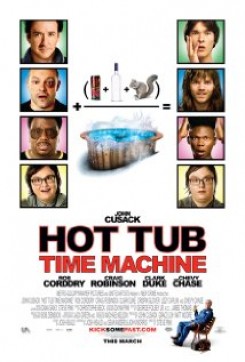 While relaxing in a hot tub at a ski resort, several men travel back to the 1980s, where they learn they must relive the same night over again to make it back to the present.

Before filming, all grounds were inspected for hazards and sets were closed off and secured. Cast and crew members were introduced to the animals and instructed on their proper handling.

Inside and outside the "Sup Dawg" pet grooming salon, several dogs are seen in the background, performing such mild action as sitting, standing, being held or petted, and walking on leashes. For all of these scenes, trainers used hand signals and verbal commands to cue the mild action, which the trained dogs were accustomed to performing.

The squirrel seen on the side of the hot tub was placed on its mark by trainers and cued to eat peanut butter that had been rubbed onto the hot tub. The snow on the edge of the tub was fake, and the tub was filled with lukewarm water with no chemicals. For the part of the scene in which the actor throws up on the squirrel, causing it to fly off the hot tub, the live squirrel was replaced with a fake squirrel. The "vomit" then shown on the squirrel's body was actually baby food and peanut butter. For the scenes in which the squirrel is on a football field and ski slopes, the squirrel was not at these actual locations — it was filmed on a set in front of a green screen. Trainers used a buzzer and food rewards to cue the well-trained squirrel to walk or stay. The football that enters the scene was gently tossed from a short distance by a well-rehearsed crew member who made sure to avoid hitting the animal. Trainers stood nearby during all the squirrel scenes with a catch net, ready to retrieve the squirrel if it ran off, which it never did.

Production provided documentation for the prairie dogs seen on a television and for the prop dead raccoon seen in the hot tub.