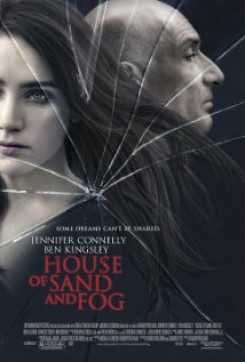 House of Sand and Fog

Formerly an Iranian air force colonel, Massoud Amir Behrani (Ben Kingsley) was used to wielding considerable clout. Now an exile living in the United States, Behrani has tried desperately to keep up the appearance of affluence in order to increase his daughter's chances of a good marriage and to capture the illusive American Dream. When down-and-out alcoholic Kathy Nicolo (Jennifer Connelly) gets evicted from her Bay-area home due to a government error on her taxes, Behrani acquires the house at public auction for a song and unintentionally finds himself in the middle of a nasty legal battle. A dispossessed Nicolo won't give up her home without a fight, and the struggle between these two strong willed individuals turns into a personal confrontation with tragic results.

As Nadi (Shohreh Aghadashloo) looks out the window of her new home, she sees a dove fly onto the bird bath in the back yard. A trainer stood just off camera holding the dove, and the bird's wings were clipped so it couldn't fly very high. The bird jumped from the trainer's hands onto the bird bath and it appeared as though it had just swooped down because it flapped its wings as it jumped. The trainer retrieved the bird once the scene was over.

Birds fly across the sky during the opening credits. Later, Kathy goes to the beach and we see several seagulls on the pier, in the air and one floating dead in the water. The camera caught all of this avian action as it naturally occurred, including the dead seagull.

There is another brief scene with a large black bird that flies onto a telephone pole. The cameraman also caught this bird in its natural state.