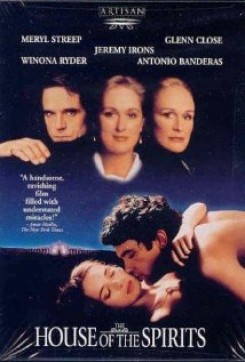 House of the Spirits is an epic drama, beginning in 1926 and spanning three generations in an unspecified country in South America. It is loosely structured along the lines of a "Romeo and Juliet" family struggle, wherein the patriarch, Estoban, at odds with his entire family as well as society in general, succeeds in becoming a senator while alienating the affections of his loved ones and nearly destroying everyone with his overbearing insensitivity. Finally, in his old age, during the war-torn anarchy of his country, he is forced to choose between his feelings of love for his daughter and his intense hatred for her political-revolutionary lover.

For the most part, the animals in this film are utilized in the background, including many shots of horses outdoors and in barns. There are some dogs as well as sheep and cattle grazing, and birds in cages. Also included are two dining scenes. One is a wedding feast with roast pig and another is a family dinner of chicken. These were provided by a catering service. Some mild action scenes include horses and mules pulling carriages and wagons. One quick shot shows a group of men helping to push a wagon that is stuck in a ditch that a mule is trying to pull out. In reality the wagon was not really stuck and its load was that of light-weight props. There were also many shots of actors riding horses. One scene shows a man riding alongside a frightened, running woman. The rider grabs her and places her with him on the back of the loping horse. Another scene shows a man firing a rifle at someone inside a barn. The bullets miss their intended victim but instead hit a wooden beam, several feet from horses. These, of course, were not bullets but squibs, set off, on cue, by the special effects department.