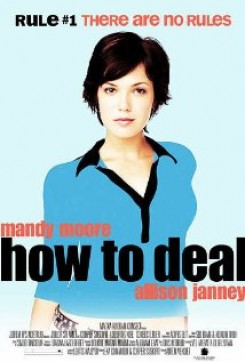 Halley (Mandy Moore), a teenager disillusioned by too many examples of love gone wrong, refuses to believe that true love exists. Then a new guy, Macon, (Trent Ford) comes along and all of that changes. She falls in love and becomes pregnant and thinks all is well until reality strikes her again.

A dog jumps into the bathroom from outside and runs to an actress and humps her leg.

As Halley sneaks a cigarette in the bathroom, she sets off the smoke alarm. When she opens up the bathroom window to let some of the smoke out, a small dog jumps into the bathroom from the open window and runs to the door where the rest of the family is standing and begins to hump a man's leg. Shelby, an energetic Jack Russell Terrier, played the part. A trainer released the dog from outside the open window onto a platform made of apple crates which made it easier for the dog to jump through the window. Another trainer was standing inside the room behind the camera man holding the dog's favorite toy. The window sill inside the bathroom which the dog jumped onto was widened to facilitate a smooth landing. The dog jumped down from the sill and ran to the trainer, who verbally cued the dog to hump the actor's leg.