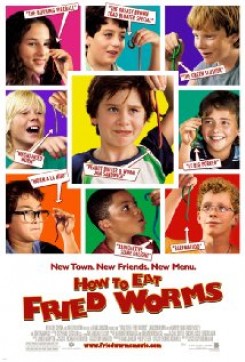 How To Eat Fried Worms

During the first day of his new school year, a fifth grade boy squares off against a bully and winds up accepting a dare that could change the balance of power within the class.

Two desert tortoises, named Max and Tex, were used interchangeably for the opening scene, which goes from animation into live action. The sequence implies that a family runs over a turtle as they drive down the road. This footage was actually shot in a secure parking lot where the turtle was filmed crawling toward a yellow line while the off-screen trainer held fresh vegetables to entice the reptile. The filmmakers used both real and fake worms throughout the movie. Worms shown coming out of a thermos were real, as were those seen in a pile on a counter. These worms were purchased from a bait store and returned when the filming was over. Most of the worms that appear in the film were not real; they were made of either rubber, gelatin and food coloring, or mushroom stems during the cooking sequences. An air hose placed inside some of the gelatin worms made them wriggle and appear quite realistic. The worms that the boys place down their pants were fake. The shot of a bird on the grass eating a worm came from stock footage purchased by the production.