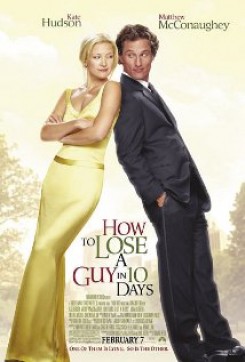 A single man (Matthew McConaughey) who has a reputation as a playboy, makes a bet that he can stay in a relationship for more than 10 days. Unfortunately, he picks the wrong woman, Andie, played by Kate Hudson. Andie is a reporter for Composure magazine and is doing an article on how to loose a guy in 10 days. Let the games begin!

Andie enters Ben's office in one scene and has Krull, a Chinese Crested hairless dog, in a bag which she carries over her shoulder. She sets the bag down on the pool table and the dog walks out of the bag and barks at Ben. The dog is wearing a sweater, which wasn't just a prop. Harry always wears a sweater to keep warm since it has no hair. The dog then relieves itself on the table. Later in the film when the dog urinates again on the pool table in Ben's house and on the table during a poker game, Andie admits that the felt material makes the dog go. The part of Krull was played by Harry, a Chinese Crested Hairless dog. The dog was fitted with a plastic tube that ran along his body under the sweater he wore and down to his crotch. The dog lifts his leg on a verbal cue by the trainer standing off camera. Water is pumped through the tube by a crew member off camera.

Ben enters his apartment with Krull on a leash. He picks the dog up and sets it on the counter, while he listens to his answering machine. He opens a beer and pours some into Krull's bowl. Krull happily begins to drink. Ben picks the dog up and sets him down on the table by Andie. A trainer handed the actor the leash and the dog walked with him. The actor gently picked the dog up and set it down on the counter. The trainer stood off camera using hand signals to get the dog to stay on the counter and look in various directions. Although it appears as if Ben is pouring beer into the bowl, it was really water. The dog happily took a drink from the bowl. The actor picked the dog up off the counter and brought it over to the table where the actress was sitting and set the dog in front of her. The trainer who was standing off camera during the scene, retrieved the dog afterwards and gave it an edible reward.

Ben talks to Krull who sits on his desk and looks at him while he holds some precious tickets to the Knicks game. He pets the dog who puts its paws up on the actors shoulder and proceeds to grab the tickets in his mouth. The trainer placed the dog on its mark on the desk. Using a hand signal from off camera, the trainer cued the dog to put its paws up on the actor's shoulders and take the tickets from the actor's hands. Afterwards the trainer took the tickets from the dog and replaced them with a treat. Andie is seen holding the dog while sitting on Ben's bed. The trainer put the dog on its mark and it was very content to sit with the actress until the director yelled, "cut.

Krull runs out in the hall with Andie and Ben and then begins to bark. When Ben tells the dog to "shut up," it walks to a corner and stands there. A trainer put the dog on its mark and used hand signals to get the dog to achieve this action.

If you look closely in a few scenes there are actors walking dogs in the background. A trainer handed the leash to the actor who walked with the animal as the trainer stood off camera.

At the end of the film, Andie lies on the couch petting a cat that is lying next to her. The cat jumps down off the couch. A trainer set the cat on it's mark next to the actress and the cat was content to stay there and get the attention. The trainer used a hand signal and held up a treat off camera encouraging the cat to jump off the couch and run right to the awaiting treat in the trainer's hand.