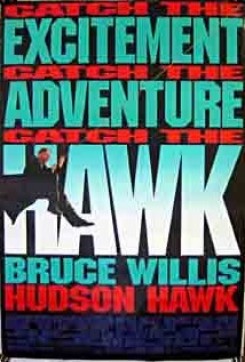 Bruce Willis stars as Hudson Hawk in this comedy-caper involving the theft of priceless works of art, organized crime, the Vatican, and the C.I.A. Shortly after being released from prison where he served time on trumped up charges, Hudson Hawk plans the heist of a valuable artifact from a heavily guarded auction house. The plan goes a bit awry, but Hudson still makes off with the artwork. When the newspapers report that the robbery was foiled and that the auction will take place as scheduled, Hudson shows up at the gallery where all bedlam breaks loose when he's recognized by a security guard. The story then shifts to Rome, where Hudson wakes up after being slipped a mickey. There's a confusing cast of characters and people are not always who and what they appear to be. The equally muddled plot lacks credibility, but since it's all done tongue in cheek, there are some amusing moments.

Oxen and donkeys appear in several scenes. A hawk in flight is seen primarily as atmosphere. In one getaway scene, Hudson Hawk has a chicken on his shoulder after supposedly falling into a chicken truck. This scene was filmed in cuts and, other than the chicken on the shoulder, no actual contact with the chickens is seen. The villainess of the film is Minerva, who has a pet dog which is her companion throughout the film. Most of the action involving the dog is mild, however in the climax of the film, Minerva orders the small dog to attack Hawk. Hawk throws a missile at the dog who soars out the window with the missile, and supposedly plummets to its death hundreds of feet below. This scene was filmed in cuts and it's obvious that the dog that goes out the window is a stuffed fake, which was confirmed by the production company.