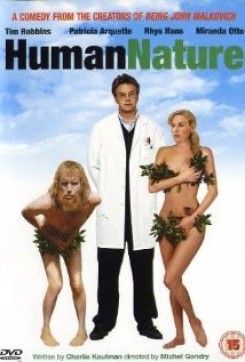 Human Nature follows the ups and downs of an obsessive scientist, a female naturalist, and the man they discover, born and raised in the wild. As scientist Nathan (Tim Robbins) trains the wild man, Puff (Rhys Ifans), in the ways of the world, Nathan's lover Lila (Patricia Arquette) fights to preserve the man's simian past.

In the opening scene, two mice are in a hole in the woods. They climb out and begin wandering around the woods. A crow from above sees the mice and flies after them. Two pied crows named Dandy and Seymour shared the role of the hungry crow while eleven white mice were alternated in their respective roles. The crow and the mice were filmed separately for this sequence. A piece of monofilament string was attached to the leg of the crow and was held by a trainer at all times. One trainer stood on a ladder and released the crow, which then flew to another trainer. For the flying close-ups, one trainer held the bird on his arm and gently turned around, prompting the crow to flap its wings. This was filmed in front of a blue screen and later, in post production, editing magic made the crow appear as though it was actually chasing the mice.

When the crow swoops down on the branch as the mice are crawling on it, the crow was cued to land on the empty branch, lured by hidden treats. The shots of the mice crawling around are real, but were filmed without the presence of the crow. The mice were added onto the branch in post production and edited together with the shots of the crow. One trainer released the mice and another trainer stood at the other end of the branch or log and used a buzzer to cue the mice to follow. When the daring mice cross the log, it is over a fake creek that was filled with warm water. The crew and trainers stood nearby and the mice crawled right over the log without any hesitation. A trainer waited on the other side with a cage and some treats.

After filming wrapped, one of the crew members took all eleven mice home with her. She adopted two of the mice herself and found homes for the others as pets in elementary school classrooms. Only in Hollywood can your class pet be a movie star too!

The dining room for the mice was a box made of plexi-glass with air holes. The trainers released the mice into plexi-glass tubes which were attached to the box. The table and chairs were specially made to fit the mice for comfort. The tiny forks were also specially made and had tiny pieces of Velcro attached to them so they would stay attached to the mice during filming. A trainer would help the mice onto the tiny chairs while computer-generated imaging (CGI) made the mice appear as though the mice were picking up the forks and eating with them. CGI also created the "electrical charge" that zapped the mice when they did not obey Nathan. To make it appear as if the mouse was zapped off his chair by the electrical charge, a trainer set the mouse on a chair and then used a tiny plastic rod to gently tilt the chair back, causing the mouse to react.

Later, two hitchhiking mice stand up side by side holding a sign. To achieve this, trainers used a board with two nails attached on either side and a piece of monofilament wire tied between them. A trainer put the mice's front paws up on the monofilament so it appears as if they are standing up. CGI was used to add the sign in post production.

When Lila is in the tub bathing, a brown mouse crawls alongside the tub. A trainer scattered some food alongside the tub and the mouse followed the trail of treats. A trainer also placed a bit of food on the mouse's face so it would stand still for a moment to lick it.

Two white mice scurry by as a wounded character lies on the grass in the park. One trainer released the two mice, which ran to another trainer who waited off camera clicking a buzzer. The mice ran to the trainer who retrieved and rewarded the mice with some edible treats.

Lila takes the lab mice into the woods. The mice inside the cage are real only until Lila opens the door and the mice exit. The exiting mice are CGI.

Tyler, the chimp, sits in a cage at a zoo. A young man and his parents are looking into the cage at the chimp, which merely stares back. Tyler's trainer stood off camera and let the chimp act naturally.

In one scene, Nathan dreams that Lila has a baby and when she hands it to him to hold, it is actually a baby chimp. A trainer wrapped the chimp in a blanket and handed it to the actress who was lying in bed. The trainer stood off camera as the actress handed the chimp to the actor standing at her bedside. He looks at the chimp and reacts.

Cow's Reaction To Puff in the Buff

As Puff walks down the street, he begins removing his clothes. As he passes a cow, Puff nods to it. The cow, Molly, was hobbled in the bushes near a fence as her trainer stood nearby.

As Lila sits in the woods, a rabbit sits next to her. Trainer put the rabbit on its mark and scattered some food. The rabbit, which belonged to a petting zoo, was content to sit for the scene.

At one point, a black bird flies into the trunk of a tree and falls dead beside the actor lying on the ground. The bird was actually a fake prop. A crew member stood off camera and threw the fake bird into the shot on the director's cue. The scene with the prop bird was edited with shots of the real crow that were filmed earlier.

As Lila wanders through the forest singing a song she comes across various animals:

A deer was put on its mark by a trainer who stood off screen. Food was scattered on the ground and another trainer crumpled a plastic bag from off camera to cue the deer to look in certain directions.

A squirrel climbs up a tree and onto a broken branch. A trainer held the squirrel in its release box while food was scattered on the branch. The trainer released the squirrel, which climbed up onto branch and ate.

A bluebird sits on tree branch and two rabbits sit by a log. A trainer placed the animals on their marks and retrieved them after filming.

A raven sits on a branch then flies off. A trainer set the bird, whose leg was attached to a monofilament wire, onto the branch. The trainer then stood off camera with his arms extended and food in one hand. The bird flew right onto the trainer's arm and ate its treats.

A coyote scopes out the area. For this scene, a dog that resembled a coyote was put on its mark while the trainer stood off camera using hand signals to get the animal to look in various directions.

An opossum makes an appearance. A trainer placed the opossum in the grass where some food had been scattered, and retrieved the animal after filming was complete.