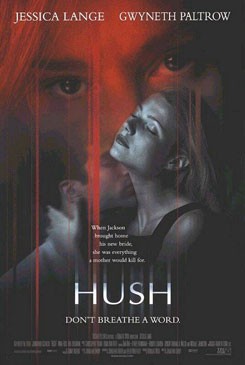 Hush is a film about Martha Baring, a possessive mother, and the lengths she is willing go to keep Jackson, her son, all to herself.

The setting for the film is at a large horse stud farm. Horses are in several scenes in the background and in the barns. In several scenes, the horses are being ridden across the farm. There is also a scene at a horse race. This scene was filmed at an actual race track. Barbara made reference to the scene being filmed in part in pre-production with actual Jockeys. In the film it looks as if it is at a racetrack. Other animal action consists of some dead rats falling from the attic to the floor, ducks on a pond being feed, and a brief shot of a man holding a turkey by the legs. Fake rats were used for the scene. American Humane was not able to be present for all of the animal action scenes. However, after conferring with the trainer and production and concluding that no American Humane guidelines were violated, we are rating Hush Believed Acceptable".