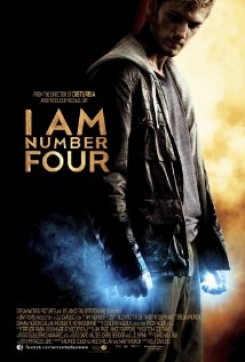 I Am Number Four

John seeks refuge from his secrets by pretending to live the life of a normal teenager, hoping to conceal his true identity. Others like him have not succeeded at this task and unfortunately for him, the enemy is steadily approaching.

Throughout the film, John (Alex Pettyfer) has a pet beagle named Bernie, who is seen performing such mild action as standing, laying, jumping, being held or petted, barking, and walking or running on or off leash. For all these scenes, trainers used hand signals and verbal commands to cue the mild action, which the trained dog was accustomed to performing.

Almost every scene in which Bernie is seen riding in the truck involved a non-moving vehicle, except for one scene at the end of the film during which the well-rehearsed actor slowly drove the truck a short distance while the other actor held the dog on his lap.

When Bernie is first discovered out in the rain, the rain was a combination of a special effect and a rain machine that sprinkled a light, warm "rain" onto the set. The dog was dried off between takes, which were limited and brief.

Bernie morphs into a giant "monster" dog, which was done with computer-generated imagery (CGI). When Bernie limps in the locker room after morphing back from the monster dog into a normal beagle, the limping was a trained behavior. The water spraying onto the dog was a rain machine that was controlled by a crew member.

Later, a wet and bloody Bernie hops on three legs in the grass, approaching John, who picks him up and hands him to Sam (Callan McAuliffe). Trainers placed nontoxic, fake blood (watery liquid) on the dog moments before filming and cued the dog to limp, which was a trained behavior.

The scene in which the truck appears to come to a screeching halt in front of the dog was filmed using a split screen — the truck and the dog were filmed separately and composited together in post-production.

A few "establishing" shots were set up with a trained gecko. A trainer placed the lizard on its mark, and the cameraman filmed the lizard walking. The rest of the action as the lizard continued to walk was computer generated.