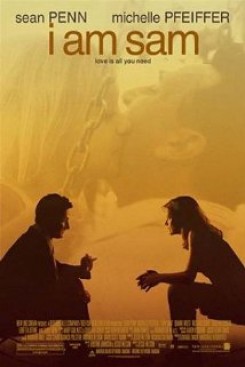 I Am Sam is an emotionally charged drama featuring Sean Penn as Sam, a disabled man with the mental capacity of a 7-year-old. As he fights for custody of his precocious young daughter Lucy, Sam teaches his high-powered attorney Rita (Michelle Pfeiffer) a few things about patience and a parent's love.

Sam's career changes from Starbucks employee to dog walker before the end of the film. Sam walks between 4-5 dogs on leashes in a several scenes. There were three trainers and a veterinarian on the set at all times and the dogs actually lived together and knew each other very well. The streets were closed off to traffic and the trainers would secure the leashes on the dogs and hand the actor the leashes. The dogs and actor were so used to this that although the trainers stood off camera and used hand signals, the dogs never even noticed.

Later, Sam and Lucy walk the dogs together. The young actress was given one leash to hold by a trainer and she walked along with Sam who had the other four dogs. One of the dogs, Floppy, sneezes a couple of times. His sneeze was caught naturally on camera during those scenes, so the writer decided to incorporate Floppy's sneezes into the film by writing a line for Sam, mentioning the dog having a cold. The dogs also lie around Sam's apartment and some of the actors pet and hold them. The trainers put the dogs on their marks and told them to stay. They stood off camera and retrieved the dogs afterwards. Willie, Rita's son, holds a dog in his lap as he sits in the bleachers and watches a soccer match. The trainer placed the dog on the actor's lap after he sat down and retrieved the dog afterwards. All of the dogs loved to be on the set and interact with the actors and crew members.

Free as a Bird

There is a brief scene where Sam and Lucy are swinging and birds fly up over them. Trainers released several white homing pigeons and they all returned home.