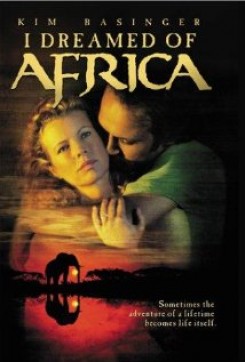 I Dreamed of Africa

Based on a true story, I Dreamed of Africa features Kim Basinger as Kuki Gallman, a privileged single mother who uproots her placid life in Italy to follow her true love Paulo (Vincent Perez) to the wilderness of Africa. The move not only awakens Kuki's spirit, but forces her to face her worst fears. Kuki triumphs by accepting the distinct rhythm of life in Africa, learning that despite what tragedies may fall, "what we love, we can never lose".

The film is infused with images of African wildlife. Flocks of birds soar over expanses of water; a herd of elephants crosses a muddy river while camels trot along in another shot; wildebeests graze in the countryside; and giraffes run free in an open field. In all of these shots, no humans are present, allowing the animals to appear undisturbed in their natural habitat. Most of the featured animals, however, are actually trained circus actors from South Africa. These animal performers usually feel comfortable in the presence of humans, and rather than feeling invaded, actually enjoy having an audience.

Throughout the movie, several German Shepherds appear in almost as many scenes as the human stars. Whether they're playing soccer in the courtyard or protectively barking at beasts in the night, the dogs are integral members of the family. Their warm and loving presence makes one particular scene extremely difficult to watch. In this scene, one of the dogs is severely wounded while fighting off a growling lion. The humans finally scare off the lion with noise and glaring light, but it is too late. The gashed and bloody dog is carried inside, where the mourning family holds a vigil for the suffering animal. A moment later, the sound of a gunshot signifies the dog's end. In order for the dog to appear more realistically wounded, AHA received unconfirmed reports stating that the dog was actually sedated for the scene, even though he was reportedly trained to perform the scene naturally. Although the dog in question, named Flash, was apparently back to normal in under ten minutes, drugging an animal for the purpose of a film is strictly against AHA guidelines.

Thematically, the movie actually promotes animal advocacy when Kuki, enraged over the recent poaching of elephants in her area, decides to fight the poachers themselves. Unfortunately, a few uncomfortable scenes depict the aftermath of the poaching on elephants and a rhinoceros. Although no animals were killed for these scenes, the realistic-looking doubles are shown lying gouged open and bloody. Kuki's advocacy is also ignited by the recent cases of disease among her cattle. Another fake animal was used as a victim of the epidemic: a dead, frothing cow lying on the grass.

Snakes also make an important appearance in the film. Kuki's son has a special interest in them, and he is later shown draining the venom from their fangs by forcing them to bite down onto a taut filter stretched over the top of a container. These scenes seem to be shot in cuts, so the boy's hand is never actually seen in the same shot as his face. This means that if the snake was actually milked, it was probably done by a trainer who knew how to handle the animals properly. However, snake milking is against AHA guidelines when performed solely for the purpose of filming.

Despite the often disturbing images in I Dreamed of Africa, the pervasive presence of animals adds realism and warmth to the film as a whole. Unfortunately, the unconfirmed reports on how certain animal action was achieved necessitate the movie's Questionable rating from the AHA.