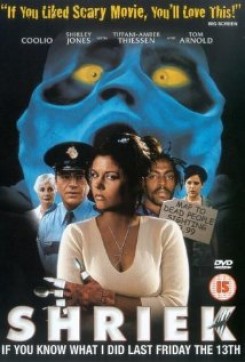 Shriek If You Know What I Did Last Friday the Thirteenth

I Know What You Screamed Last Semester is a comedy about horror films. It is about four teenagers who promise to keep a murder a secret between them. They begin to receive notes from someone who claims to know what they did. You may recognize every horror film you can think of incorporated into the plot of this film.

In one scene we see a cat jump from off screen onto the floor, frightening a young woman at a party. The actor standing next to her, bends down and pets the cat. The trainer released the cat from just off camera and the cat jumped down onto the floor. The actor bent down and scratched the cat. The trainer retrieved the cat after the scene was shot. Later, we see the cat lying on the kitchen counter as the actors talk to it. The trainer put the cat on its mark on the counter and the cat was very content to lie there and listen. The trainer retrieved the cat afterwards. Towards the end of the film we see a couple walking around a blood splattered room. There is a brief shot of the cat sitting in an empty sink. The trainer put the cat into the sink and stood next to it, just off camera. The two scenes that show insects use computer generated images. The bug that was zapped in the bug zapper and the bees which flew around the young woman who was stung were all CGI. The deer that was shown hit by the car and thrown into the water was plastic. If you look closely, you are able to see the seams in the side of the felled animal.