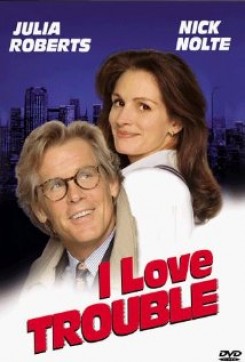 I Love Trouble is the story of hot shot newspaper columnist and author, Peter Bracket, who gets roped into covering a train crash story for his paper, the Chicago Chronicle. Also covering the derailment story is a female rookie reporter, Rachel Peterson, who is working for a rival paper, the Chicago Globe. He is interested in her legs and she is interested in getting a great story. She manages to get a scoop on him which makes him competitive and throws them both into a dangerous story involving industrial and government cover-ups as well as murder. At one point she sends him flowers and he counters with a gift to her. He sends Rachel a puppy via messenger. When the puppy is placed on a piece of newspaper he proceeds to relieve himself, specifically on her story. In a few scenes the dog is seen either in a car riding next to Rachel or being carried in her arms into her apartment. At one point, while she is out of town investigating a lead, the dog is seen being walked on a leash by her neighbor.

The animal action was very mild. There is a scene in which the dog puts it's forelegs on the bed and barks. For this scene, a trainer was just off camera giving the dog verbal and hand commands. As the story progresses, there is a government cover-up of a new genetic drug that, while causing cancer in laboratory animals, will mature dairy cows faster. To enhance this part of the plot, there are several scenes where a laboratory is featured. There are a variety of animals seen in cages and pens: a lemur, spider monkeys, chimps, dogs, hamsters, cows, rabbits, a goat, and rats. These animals were placed in the cages fifteen minutes before shooting and trainers stayed with each primate, or groups of animals, just out of camera range. There is a scene where gunfire occurs in the lab. The animals on set were separated by very thick tempered glass to muffled the sound. At one point an actor pulls a white rat out of his pocket by its tail. The rat had been placed in the pocket by a trainer. This was shot as a separate cut and the animal was not in the pocket very long nor was the rat left to run amidst the chaos that follows in the lab. When dead rats are shown, fake animals were used as props. Peter Bracket must sneak into the chemical company in order to get into the laboratory and get the evidence he needs. He does this by hiding in a truck which is transporting rats to the company. He lights a match to see what is in the truck and illuminates dozens of cages containing the live rats who are actively moving around. These rats were placed in the truck by five trainers just prior to shooting and the cages were brushed with a peanut butter mixture which the rats enthusiastically ate. This eating activity kept the rats moving naturally. Other scenes featured cows in the background on a country road and a flock of geese in a country farmyard. In one scene when Peter and Rachel are searching the home of a suspect, they come across a bird in a cage and Rachel reaches in to give the bird some water.