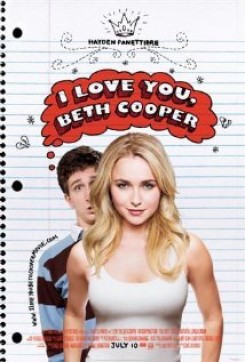 I Love You Beth Cooper

When Denis (Paul Rust), a valedictorian nerd, declares his love for a popular cheerleader in the middle of his graduation speech, it shocks everyone — including her football-playing bully boyfriend. But that night, thanks to a series of fortunate events, Denis and his friends get to hang out with Beth and her friends until sunrise.

Cows are seen in a fenced-in field at night. The teens approach a cow that is grazing, and one boy tries to push it over, but it doesn't budge. All cows were placed on their marks and allowed to graze. The cow that the boy tried to push was placed on its mark with a soft hobble on its front and back legs, and the actor was well-rehearsed to exaggerate the pushing action, making it look like he put some muscle into it. At the end of this scene, all of the cows suddenly charge the teens. The actors, who were in front of the cows, ran toward the camera, as wranglers shook food buckets and called the cows to their paddock. The cows ran past the camera, looking like they were chasing the actors.

A raccoon picks up a shirt, stands up, growls at the teens and then chases them down a country road. Two raccoons were used in this scene. Fencing was placed along the road to prevent the animals from going into the forest. Food and a buzzer were hidden in the shirt, and trainers remotely activated the buzzer to get the raccoon to approach the shirt, paw at it and pick it up. The raccoon ate the food while the actors spoke their dialogue. Trainers then remotely activated a buzzer hidden behind the actors, causing the raccoon to walk toward the actors, who screamed and ran away. The raccoons were equipped with waist ties attached to stakes in the ground and hidden by the shirt. Part of the growling effect was computer-generated. Also, a stuffed animal was used to get the raccoons' attention and to prompt a certain look. The raccoons were immediately retrieved after filming.

A boy dips a towel into a fishbowl containing goldfish. The actor was well-rehearsed for the scene and knew to barely dip the towel, being careful to avoid the fish. Once production finished filming, a crew member adopted the fish.

Production provided documentation for the taxidermy bear, deer, owl and other animals seen inside the cabin.