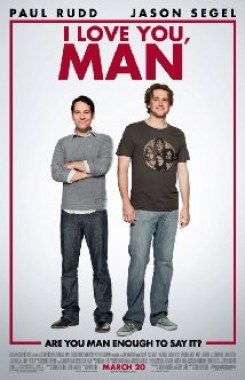 I Love You, Man

Newly engaged Peter (Paul Rudd) is a man who has always had girlfriends but no male friends, so he sets out to find a best man for his wedding. After several failed "man-dates," he finally bonds with an unpredictable man named Sydney (Jason Segel), who causes Peter to question if his new friend is completely sane.

Throughout the film, Sydney (Jason Segel) has a pet puggle named Anwar Sadat. Cast and crew members were introduced to the dog and instructed on its proper handling before filming began. Sets were secured and enclosed and off-camera trainers stood a few feet away. For scenes in which the dog performs such mild action as being walked on a leash, sitting on a dog bed or walking around the garage, trainers used verbal cues and hand signals to cue the action and the actors were well-rehearsed for the scenes.

For the scene in which Anwar appears to squat and defecate, this was a trained behavior in which the dog was cued to sit on a special small pedestal, often used in films to depict defecating, which kept its rear from touching the ground. This "squatting" action made him appear to defecate, and then the pedestal was digitally removed in post-production.

In a couple of scenes, Sydney walks Anwar along a boardwalk while several other leashed dogs walk by with their owners. A trainer handed the leashed puggle to the actor moments before filming. The other dogs were private dogs being walked on leashes by their actual owners. They were accustomed to being among crowds and were unfazed by the stimuli.

Due to late notification and limited resources, American Humane did not monitor some of the dog action.