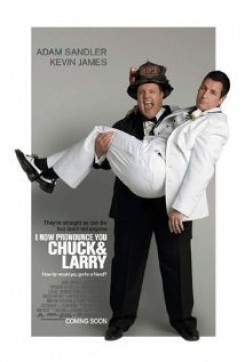 I Now Pronounce You Chuck And Larry

Chuck (Adam Sandler) and Larry (Kevin James) are Brooklyn firefighters who pretend to be a gay couple in order to receive domestic partner benefits.

At the end of the film calendar photos of firemen are shown, and in some of the photos, a Dalmation appears with them. American Humane monitored the shooting of the photos, which were taken specifically for the film. The dog wore a plastic fire hat and was placed on its mark by a trainer who stood off camera and retrieved the dog afterwards. In a brief scene outside the capitol building where a protest is taking place, there is a policeman sitting atop a horse in the background. This was a real policeman and the horse was used to its rider and to being in crowds. The production provided documentation that the dead rat that Chuck holds up in one scene was fake.