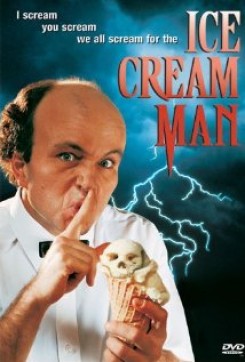 This is a very bloody and graphic movie about Gregory Tudor, a sanitarium patient, who is released from the hospital and goes into the ice cream business. The only problem is, Gregory is not cured!!! Gregory has spent his entire life growing up in the Wishing Well Sanitarium. Due to overcrowding, he is released into the general populous. Unfortunately, he is still a very disturbed young man. He has a hero, a man known as The Ice Cream King. Gregory wants to be just like him, so after being released, Gregory rents the old building where The Ice Cream King, long since deceased, had run his ice cream parlor. Gregory now calls himself The Ice Cream Prince. He kidnaps people, kills them, and chops them up, turning their body parts into ice cream. As his rampage continues, more and more people turn up missing. Three young people witness one of their school buddies being abducted by Gregory. Now the police have enough proof to step in and pursue Gregory in an effort to end these senseless killings.

In one disturbing scene, Gregory supposedly kills the neighbor's dog, chops him up, and places the animal parts in an ice cream vat. This scene was shot in cuts. The real dog is only seen when he is in his backyard and he walks over to the fence where Gregory is standing. When Gregory is seen killing the dog, we merely see Gregory with a knife stabbing something out of camera range. The "body parts" that were used were fake. The sounds of a dog yelping were added in post production. In another scene in the ice cream parlor, a mouse is seen walking in a vat of human remains. Worms are also shown crawling across a pair of blood-covered shoes. For each of these scenes the animal handlers merely placed each of the animals in the appropriate place and retrieved each after its shot was completed. In the scene with the mouse, the human remains were actually dummy body parts. Stage blood was used in all scenes involving blood.