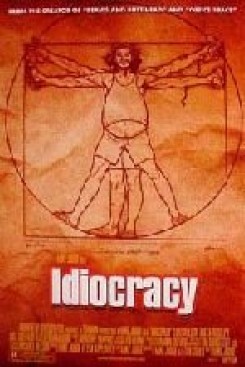 When the Pentagon needs to test its top-secret Human Hibernation Project – designed to keep superior individuals "fresh" for when they're needed most – it chooses as guinea pigs the extremely average Joe Bowers (Luke Wilson) and a prostitute named Rita (Maya Rudolph). Though slated to last for one year, the project gets scrapped and Joe and Rita remain in hibernation for centuries. When they finally awaken, they discover that Earth's inhabitants have gradually been dumbed down, making Joe and Rita the smartest people alive.

In a genetic engineering lab, scientists examine the "masculinity" of an orangutan wearing boxer shorts. Production conducted a safety meeting prior to filming, and the enclosed set was cleared of all unnecessary personnel. Beneath the boxers, Bam Bam the orangutan wore a pair of boy's briefs that had a protective cup with a wooden dowel attached. Between set-ups, the ape was either removed from the cage or his handler would sit inside with him.

A clip from a television program features a man hanging on a wall when a black and white Jack Russell terrier runs up and clamps onto his crotch. To achieve this shot, a trainer cued the dog to run and grab at a dog toy the actor held in front him.

At Costco, a man can be seen leading a herd of goats in the background. This action took place in an enclosed area with several wranglers, and extras were instructed not to distract or cross near the goats. Though difficult to see on screen, a border collie named Nita brought up the rear of the herd.

As Joe examines some crops, two cows drink from a large cylindrical tank. This scene was filmed at a ranch in Austin, Texas, and the cows belonged to the owner of the site.

Birds flying in Costco and those swooping above freeway rubble were computer generated images (CGI).

American Humane also monitored the filming of armadillos and of dogs pulling a cart. Though this footage does not appear in the theatrical release, it may resurface in bonus features on the DVD.