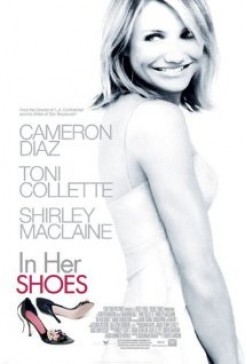 Meet the Feller sisters. Party-hardy Maggie (Diaz) is fun-loving and irresponsible, while Rose (Collette) is a high-powered attorney who watches Maggie's wild life with envy and distain. When an attempt to live together fails miserably, they go off in different directions to find the missing pieces in their lives, forgive the past, and reclaim each other's love.

American Humane's Safety Representative on set instructed the actress not to get too much soap on Foxy's face and eyes, and to watch out for the dog's ears when rinsing him off.

Later, Maggie bathes a dog she calls Honey Bun. She's a bit over-zealous with the shampoo, however, and the basin quickly fills up with suds. The special effects team pumped this excess foam directly into the sink, and in both bathing cases, the production used baby shampoo to protect the dogs' eyes.

In one scene, the lawyer-cum-dog walker sits on a park bench in Rittenhouse Square with four dogs and her best friend, Amy (Brooke Smith). A trainer placed the leashed dogs in sit-stay or down-stay positions at the actress's feet and waited while the camera panned over the group and filmed close-ups of the individual dogs.

To make it look like the four dogs get tangled in one shot, a trainer handed Collette two leashes for each hand and off-screen trainers called the dogs to tug on their leads while the actress pretended they were getting twisted together.

Later, Rose sits on a bench in the rain with two dogs. Special effects rain showered down via three condor rain towers while the dogs performed normal dog-in-the-rain action. Due to Philadelphia's chilly temperatures during filming, as a safety precaution the Safety Representative on set asked the producer to consider the dogs' ability to withstand cold and rain when casting for this shot, and recommended that larger hunting breeds be used. The producer understood and cooperated with the suggestion.

During a scene in front of the Philadelphia Art Museum, Rose sees the "Rocky" steps and, inspired, runs up with her four canine charges. A dog trainer in wardrobe went up the steps ahead of the actress to keep the dogs motivated. Collette and the dogs rehearsed this shot several times; all dogs were leashed and well controlled by trainers.

In a scene at Rose's apartment, Honey Bun licks an empty ice cream container abandoned on the floor. For this mild action, the trainer put a dab of ice cream on the floor next to the container to interest the dog and verbally cued it to stick its nose inside the empty box.