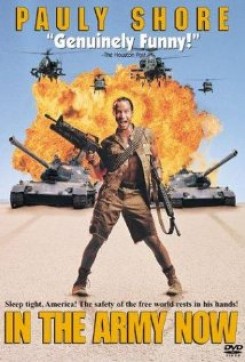 In The Army Now

In the Army Now is a zany, wacky story about Bones Conway and his best friend, Jack Kaufman, a couple of "long haired" misfits who work at Crazy Boy's video in Glendale, California. The twenty-six year olds' ambition in life is to become partners in their own video store some day. After they are both fired from Crazy Boy's for their outrageous shenanigans, they attempt to think of a way to get the investment money they need to open their store. While pondering a solution as they play miniature golf, Bones and Jack meet a couple of army reserves who tell them of the wonderful advantages joining the Army can give them. They can get a college education, earn great money while they learn, and if they pick the right job, they won't be summoned to active duty. With their hair all but shaved off, they are immediately assigned to a no-nonsense Drill Sergeant who makes it her goal to assign them to as many disgusting duties as possible. Our two heroes are definitely not army material and the Sergeant is out to prove it. After boot camp, they are assigned to a water purification unit along with Fred, who is as useless as Jack and Bones, and tomboyish Christine, a dedicated young woman who can do the work of all four of them. Together the unit surprisingly comes up with the tastiest water, and they win a commendation. In the meantime, a desert crisis with Libya that threatens the U.N. Peace Keeping Mission in CHAD, an African/Libyan country, breaks out. Because it is the desert, a water unit is essential, so our wacky group is shipped overseas. They are ordered to form a convoy to take water to the front lines. When their lead truck breaks down and ultimately blows up, all of the other trucks are destroyed, except for one. They are hopelessly lost and find themselves driving around in circles in the desert.

When their truck stops running, they have to start walking. They come upon some palm trees where they think there is water. What they initially find, however, is a cobra snake which strikes at them several times. Bones shoots at the snake several times and ultimately kills it with the butt of his gun. He proudly holds the dead snake up with his gun and later we see them cooking the snake. A live snake was used for the establishing shot of the snake. You never see the snake when it supposedly is being shot and pounded into the ground and, of course, the snake was not there. It was another dead snake that had been preserved in formaldehyde that Bones held up. When the group was supposedly roasting the snake for their dinner, chicken thighs were used in place of the snake. In one scene, Fred pounds what he thinks is a scorpion in his bag. In reality, there was no scorpion. Another time, Bones brushes a scorpion off of Fred's back and pounds it into the sand. This scene was filmed in cuts. The scorpion handler place the real scorpion on Fred's back, and lightly brushed it off. We never actually see a scorpion when Bones supposedly pounds it into the sand. In two scenes, vultures are seen sitting on top of the group's broken-down truck. While they are stranded, a caravan of Bedouin families, along with five donkeys, ten camels, twenty goats and two bulls come over the rise to their rescue. Our group barters with the Bedouins to give them a camel. In this scene the animals were lead by fifteen trainers and wranglers who were dressed as the Bedouins. The borrowed camel stays with our group and guides them right into an enemy camp where they are immediately imprisoned. They manage to escape and they are once again on their way. They come upon two dune buggies and artillery. Bones pats the camel and tells him to go back to his home, but the camel refuses and follows them across the desert. At the top of a ridge, they are attacked by a band of enemy Arabs who start shooting at them. As they are held at gun point, our hero camel, saves the day as he charges up behind an Arab, knocks him down and holds him there with his hoof. The camel was especially trained for this scene. At the sound of a buzzer, he would charge toward a stuntman who would then fake a fall. The camel was also trained to gently place his hoof on the stuntman. Our group manages to hold the whole Arab Army at bay and, using their new found equipment, they manage to pin point the enemy for the air force to bomb. They even manage to blow up the enemy's missile and become heroes. As they are being congratulated by their commanding officer, the camel is being helicoptered back to the American camp in a basket.. For the high scenes of the camel in the basket, a fake camel is used. The real camel was used only when the basket is close to the ground.. Lead ropes and cargo netting were used to protect the camel, who was never over three feet off the ground. The camel is there again with Bones and Jack as they open their video store. Bones kisses the camel and the camel returns the affection by kissing him on the neck. To accomplish this, honey and carrots were applied to Bones' neck and the camel licked it.