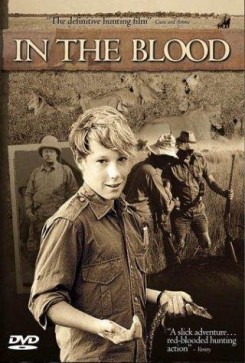 In The Blood is a pro-hunting documentary that, in the guise of conservation, glamorizes big game hunting in Africa. In the film, ancestors of President Teddy Roosevelt, including Teddy Roosevelt V, and ardent admirers of the late President follow the route Roosevelt took as a big game hunter in Kenya. They relive his adventures in every detail, including using his guns in their hunt.

The film is wrought with contradictions between words and actions. The hunters speak of their love for animals as being the underlying reason they started to hunt. One hunter even describes hunting as very sensual—a time of great closeness between the hunted and the hunter. The hunters all speak of the horrors of poaching and at one point in the movie capture some poachers and have them arrested. They reason that hunting is important for the economy of the area and if it were ever stopped that poaching would increase. There was even a discussion around a campfire one night as to the pros and cons of whether they should search out and kill a crocodile on the following day or in fact if any animal should be killed at all.

In spite of the discussions of their love for animals and their philosophical discussions on the pros and cons of hunting, dozens of animals were brutally killed in the making of In The Blood. Dozens of birds were shot, many falling to the ground still alive. Many water buffalo were killed—not always quickly. Throughout the re-creation of Roosevelt's safari, the young people in the group were being taught how to hunt.

In the closing scene, the director's son, Tyssen Butler, did his first big kill. He shot a water buffalo three times. In an attempt to escape, the buffalo ran as long as it could with the hunting party chasing it, until it became so tired that it could not walk anymore. As the animal stood in total exhaustion, Butler shot it two more times and it dropped dead. Upon approaching this magnificent animal, the young man shed a few tears, at which point the men who were teaching Butler how to kill praised him for having done a great thing. They then slit the buffalo's throat, put their hands in its blood and covered Butler's face with it. In the end, they convinced the young man that he had done a wonderful thing. He proclaimed he would continue to hunt and that he would teach his children to hunt also.