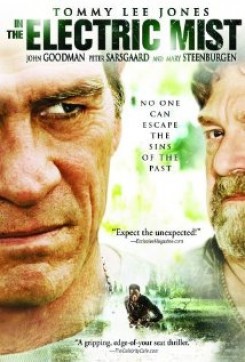 In The Electric Mist

A horse stands in the background alongside a road as Dave Robicheaux (Tommy Lee Jones) drives down the street. This horse was caught on film in its natural environment.

A man walks onto a porch with a raccoon and hands it to Alafair (Alana Locke), who holds it by the scruff of the neck and walks off with it. The actors were instructed on the animal's proper handling, and the raccoon was accustomed to being held by its scruff (this is a standard carrying technique). The raccoon had been trained to work on a leash and harness. The trainer handed the raccoon to the well-rehearsed actress, who quickly walked a planned path with the animal in hand. As an added precaution, the trainer hid behind a tree along the actress' path.

In a yard, rabbits are seen in cages. Robicheaux opens a cage door, feeds the rabbits and closes the door. Trainers made sure the hutches were secured and cleared of all debris. The rabbits were then placed in the hutches and allowed to do whatever came naturally. The actor was instructed on how to place the rabbits' food in their bowls and how to properly shut and latch the hutch door.

Crabs crawl on a dead body inside a barrel. Trainers placed five dead crabs, along with seaweed from the gulf, on top of a fake dead body. Trainers then used a stick to place several live crabs in the barrel, which contained some of their regular aquarium water to keep them moist and comfortable, and allowed them to crawl around on the seaweed, which they were accustomed to. After each take, crabs were rotated to minimize their time out of their habitat. Production provided documentation for the dead crabs.

Production provided documentation that the animal mounts on the wall, the pig roasted on the spit and the salamander that dangles from a fishing pole were props.