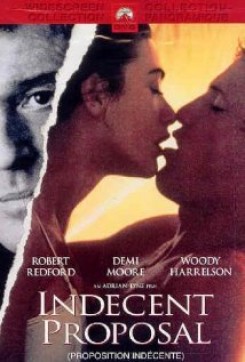 Diana and David Murphy are a devoted young couple. She is a real estate agent and he's an architect. They are very much in love and they are very much in debt. They can't keep up their house payments and, unless they can come up with $50,000 fast, they are going to lose everything. They decide to solve their problems by trying their luck in Las Vegas. At first they are on a winning streak and are half way to their goal, winning $25,000. Unfortunately, the next day they lose it all. While they're still at the gaming tables, John Gage, a debonair billionaire asks to borrow Diana for luck. He says he'd been losing, but when she appeared, his luck turned. When Diana rolls the dice for him he wins a bundle. Gage provides a plush hotel room for the couple and has a very expensive dress delivered to Diana and invites the pair to a party in his suite. After the party he offers David one million dollars for a night with his wife. They refuse, but later that night they ponder the possibilities of what that money could do for them. They believe her time with Gage would be meaningless and over quickly and then they would have the rest of their lives. They decide to go through with it and have their attorney draw up a contract. At the last minute David changes his mind, but it's too late. Gage has taken Diana off in his helicopter to his yacht, and David and Diana's relationship is headed for stormy seas.

Diana and David's pet dog is present in many scenes throughout the film. His role is strictly that of a pet companion and his actions are basic and simple. A variety of exotic animals are seen in a garden party setting for a charity auction to raise money for the zoo. Animals such as snakes, parrots, an orangutan, chimps and an elephant mingled with the party guests. To achieve this, trainers took the roles of party guests and held or walked with the animals. Additional insert shots were made in which the animals were filmed separately. In other animal action seagulls are seen briefly at a pier and, as David flips channels on TV, a bull is seen briefly. Stock footage was used for this scene.