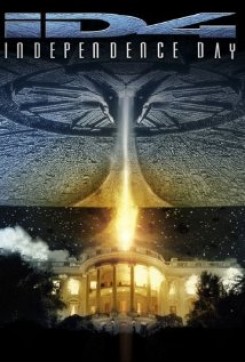 Independence Day is a film about the earth being invaded by Aliens on July 3, 1996. The Aliens are like locusts. They travel from planet to planet sapping the energy from the surface and completely destroying its inhabitants. Steve is a Marine flight officer getting ready to celebrate the Fourth of July with Jasmine, his girlfriend, and Dylan, her son, when they wake up to find an Alien space craft hovering over Los Angeles. Steve finds himself being called back to the base as the armed forces are put on red alert. When he leaves for the base he can see that Jasmine is scared, so he tells her to pack up Dylan and Boomer, the dog, and come out to the base and stay. Meanwhile, in New York a similar space craft is hovering over that city. David Martin, a computer wizard, is a cable technician in charge of the largest cable company in New York. Upon arrival to his office, David finds all of his technicians in an uproar because of the loss of reception from the satellites. When David trys to switch the satellites direction, he is surprised to find that all control has been lost. On closer inspection, he finds a signal that is being transmitted to the satellites from the alien space craft. David figures out that the signal is some sort of timer and within a few hours New York City, Los Angeles, and Washington D.C. will be destroyed. He immediately goes to pick up his father and head for Washington, where Constance, his ex-wife, is an aide to the President. After arriving in Washington, David contacts Constance and she sets up a meeting for him with the President. He has to convince the President and his advisors that they have only a matter of minutes to get out of Washington and evacuate the other cities before everyone is destroyed. The President and his entourage on Air Force One just make it out of the city before the aliens simultaneously strike all three cities. At the same time, Steve is flying over the desert on a mission to try and destroy the alien ships. After failing to break through the aliens defense shields, Steve, the only fighter pilot to make it back safely, arrives at the base where the President and David are presently trying to find a solution. David finally figures out a way to break the aliens shields. It takes the courage of a young president, an air force pilot and a computer genius to break through the Alien's shields and save the world.

Boomer, the dog, is seen throughout the film. We first see Boomer at Jasmine's house when he jumps on her bed to bring Steve his tennis shoes. The trainer using verbal and hand commands cued the dog to move towards the bed and pick up the tennis shoes. Then he cued the dog to jump onto the bed, drop the shoes, and lay down. When the actor stands and walks out of the room, the dog merely followed him. In another scene, Boomer is seen in the car with Jasmine and Dylan as they are leaving the city for the Marine base. While they are on the freeway, the aliens attack, scattering debris everywhere. Jasmine looks at her rear view mirror and sees a ball of fire quickly descending on the car. She gets out of the car with Dylan and Boomer and they make their way towards a tunnel, reaching the interior. As they walk through the debris, Jasmine sees the ball of fire rapidly getting closer. She sees a maintenance alcove in the tunnel and dives inside with Dylan. Jasmine frantically calls to Boomer as he jumps onto the trunk of a car, barks, then leaps into the alcove to safety. This scene was shot in cuts. For the A to B shots of the dog walking towards and through the tunnel, trainer #1 placed the dog on his mark and released him while trainer #2 called the dog to him. The segment of the dog jumping on and off of the car was filmed before a blue screen and later inserted during post-production with the fire and debris. When the dog leaps into the alcove, trainer #1 held the dog at the base of a ramp and then released him while trainer #2 cued the dog to jump. Later the two shots were spliced together to make it appear as though the dog jumped from the car into the alcove. Later, Jasmine, Dylan, and Boomer are seen approaching a downed helicopter. Boomer runs over to a woman lying on the ground, wounded from the crash. In a few other scenes, Boomer is seen at the marine base with Dylan sitting on the floor or being walked on his leash. For theses scenes the trainer placed the dog on his mark and cued him with verbal and hand commands. Other animal action consists of a policeman on horseback in New York City in the middle of stalled traffic and of a camel seen in the desert for a brief moment.