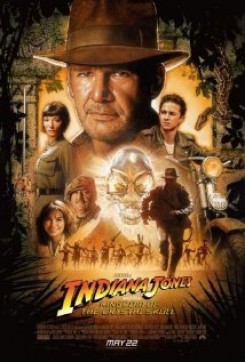 Indiana Jones and the Kingdom of the Crystal Skull

Dr. Henry "Indiana" Jones (Harrison Ford) becomes entangled in a Soviet plot to uncover the secret behind some mysterious artifacts known as the Crystal Skulls.

As Mutt (Shia LaBeouf) is hanging in the vines in the jungle, he looks up and sees a monkey on a branch next to him. Suddenly he is surrounded by monkeys hanging and swinging from vine to vine, as he begins to swing also. This scene was filmed on a set and the branches and vines were made and secured by crew members and checked by the trainer before filming began. The monkey was placed on a branch and a trainer stood behind the actor, using verbal cues to get the monkey to look in his direction. The monkey was then filmed swinging on the vines, climbing and jumping, and that footage was used in post-production to digitally create more monkeys for the scene.

If you look closely at the scene in the cemetery, you can see a rat walking across a grave and a vulture standing in the background. A trainer placed the rat on its mark on the fake grave and used a buzzer to get it to walk in a certain direction. The vulture wore a monofilament line attached to one leg and held by a trainer who hid behind a nearby fake rock.

Indiana Jones is slowly sinking in quicksand and Mutt finds what he thinks is a vine but turns out to be a large snake. He throws it to Indy, who grabs it and is pulled out just in time. An olive python was used for this scene. This particular snake was chosen because it is able to fall a foot to the ground naturally without being hurt. Only necessary cast and crew were allowed on set. The ground was made of ground corn cobs and was very safe and soft. Both actors were instructed on the safe handling of the snake before filming began. Both actors appear to be rough with the snake in this scene, but they were actually gentle. A fake snake replaced the real one when Indiana is being pulled out.

Indiana and Mutt are standing outside a Peruvian airport as chickens walk around and a couple of goats are tied to a flagpole in the background. There are also donkeys and llamas in the background as Indy and Mutt leave the airport and walk through a village. Wranglers tied the goats to the flagpole after checking the grounds and scattering hay around to keep the goats occupied. The chickens were placed in pens on the grass near the actors and removed from the pens right before the cameras rolled. Chicken grain was scattered to keep the birds enticed. A plane taxies by in the foreground, but the animals were kept a safe distance away and trainers and crew members surrounded the set to make sure the chickens could not wander. The chickens did not even seem to notice the plane.

The gophers, scorpions and ants that appear in the film are computer-generated images (CGI).

The film does not carry the "No Animals Were Harmed" end-credit disclaimer at the end because the production did not give American Humane a prerelease screening of the film, which is one of the requirements for issuing the disclaimer.