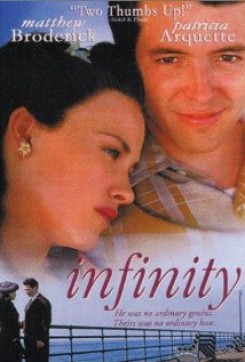 Infinity is a film based on the early life of Richard Feynman, the renowned physicist, as he comes to terms with life, love and loyalty during World War II. As a small boy, Richard was intrigued with science and how things worked. He never lost interest and his thirst for knowledge grew as he did. While in high school, Richard meets Arline Greenbaum and the two fall in love. After dating for two years, Arline becomes ill and the couple find out that she has Tuberculosis. However, Richard and Arline decide that they were destined to be together, so they marry and try to defy the odds. Shortly after the couple marry, Richard being a genius in physics, is approached by the government to work on a top secret assignment. Even though Arline is in and out of the hospital most of the time, the couple decides that Richard should take the job, which turns out to be work on the Atom Bomb. It is a time of turmoil in Richard's life as he has to deal with Arline's approaching death and his feelings about the bomb he has helped to create.

In one scene, Richard and Arline are in a shop at the pier in Atlantic City and a dog is seen sitting beside a boy. In another scene, Richard is sitting on a park bench outside the hospital and a dog is seen walking over to him and Richard pets him. There is an earlier scene where Richard and his father are sitting on a park bench and a dog is seen in the background walking by. For the scenes where the dog walks from A to B, trainer #1 released the dog as trainer #2 off camera, used verbal commands to cue the dog to his next mark.. When the dog is seen sitting next to the boy, the trainer merely placed the dog on his mark and gave the dog a "stay" command. In another scene, Richard and Arline are standing on the pier and a man is seen giving a little girl a pony ride. The little girl was placed on the pony and the trainer merely lead the pony from A to B.