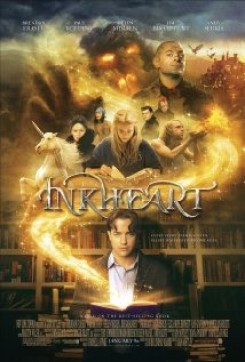 A man named Mortimer (Brendon Fraser) has a special gift — his voice is so powerful that when he reads stories aloud, he can bring the characters to life. In a search to find his wife, who went missing when he read aloud several years ago, his gift becomes a curse when he unintentionally brings evil characters out of a book.

Before any animal was filmed, the grounds were thoroughly inspected for safety. Actors and crew members were introduced to the animals and instructed on their proper handling before filming. Sets were secured and all possible exits were blocked off. Snow and ice were special effects; snow on the ground was made of paper. For shots in which animals are seen with writing on their bodies, hypoallergenic black hairspray was sprayed onto their coats with stencils and brushed out after filming. All animals were given rest, water, praise and treats between takes.

Dustfinger (Paul Bettany) has a pet ferret that he takes everywhere with him. Several ferrets were alternated in the role. All ferrets were trained and accustomed to running up people's arms, "riding" on shoulders, going into a bag, carrying objects in their mouths and coming to a trainer when called or cued with a buzzer or clicker. The bag the ferret goes into was threaded with a wire to keep it open, giving the ferret easy access and good ventilation. For scenes in which the ferret runs from point A to point B, one trainer released it and a second trainer cued it using a buzzer or clicker, and retrieved it. For shots in which the well-trained ferret stands on its hind legs, it was cued to "sit up." For shots in which the ferret sits on Dustfinger's shoulder, a trainer handed it to the actor moments before filming and used a treat on a pole to keep its attention. For scenes in which Dustfinger performs more intense action with the ferret on his shoulders, trainers rigged the ferret with a safety line around its waist and either tied the line to the actor's shoulder or controlled it from off-camera. To get the ferret to stay on its mark in certain scenes, trainers placed baby food on its mark. The horns on the ferret's head were lightweight props attached with water-based glue, and they were removed after filming.

Toto the dog is seen in various scenes in the film. Whenever Toto is held by the scruff of the neck, the action was mild and brief, and the actors were well-rehearsed. The dog had been trained to be held by the scruff, and it wagged its tail and licked the actors who held it. For scenes in which the dog performs mild action such as walking or running, off-camera trainers used verbal cues and hand signals. For rehearsal shots, a stuffed animal prop was used.

The part of the scene in which Toto appears to jump out of the cage to fetch a crumpled piece of paper was filmed using creative camera cuts. Trainers removed the dog from the cage by hand and set it on the ground. They then raised the cage and verbally cued the dog to run under it to fetch the paper and return it to an off-camera trainer. The wind and debris in this scene were special effects and Styrofoam.

A woman rides a white horse toward a lectern. The rider was a stunt rider and the surrounding men holding guns (nonworking props) were stuntmen accustomed to being around horses. For the part of the scene in which Toto is in the hanging cage, the cage was a custom-made prop with mesh lining on the bottom and nylon around the base to prevent the dog from getting out. The cage was suspended from above and secured to the floor with thick ropes to minimize movement and sway. Trainers stood near the dog and used a bait stick to get the dog's attention. Food was placed by the dog's feet in the cage to reward it for staying on its mark.

Several snakes slither over a book inside a box. A heated pad was placed at the bottom of the well-ventilated box and the book was placed on top. Then, harmless corn snakes (also known as rat snakes) were placed on the book moments before filming and retrieved immediately after. The American Humane Animal Safety Representative's™ hands doubled as the actor's hands in this scene. Whenever a snake tried to crawl out the side of the box, the well-trained actors standing on either side of the box gently guided them back inside.

Pigeons and seagulls fly around the shoreline. These birds were filmed in their natural habitat. The production tossed bread crumbs near the camera to entice the birds into view.

Animals are prisoners in a stable. All animals were filmed on a secure set with exits blocked off. The stable floors were made of packed soil covered in straw. The close-up of the crocodile involved a live crocodile in a custom-made, heated pool on set. Trainers brought the crocodile to the set in its usual travel box and released it only after the secured set had been cleared of all crew. One trainer sat on it to keep it in place while another taped its jaws shut for safety. While the camera filmed the close-up, the trainer sitting astride the crocodile stroked it and gently dripped water near its eyes to get it to blink. The crocodile was returned to its travel box and sent home immediately after filming. For scenes in which the crocodile is splashing around, an animatronic crocodile was used.

The dogs were brought in and placed on their marks. Trainers used bait sticks to get the dogs to look in certain directions and verbally cued them to speak and jump up.

The unicorn was a trained horse with a Styrofoam horn attached to its head using hemp padding and a plastic throat latch. Trainers hid in the horse's stable during filming. The winged monkeys were all computer-generated.

Whenever a townsperson is seen with an animal in the background, such as a man running through the town square holding a pig, trainers instructed the actors on the animals' proper handling. Animals were handed to the actors right before filming and retrieved right after.

Due to late notification or limited resources, American Humane did not monitor some of the ferret and dog action or any of the cat, camel, mule or hummingbird action.