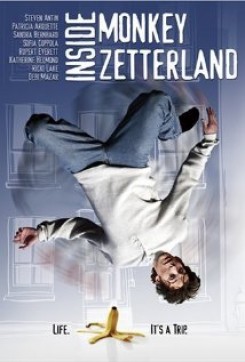 Inside Monkey Zetterland is an outlandish story of one man's very confusing outlook on life. Monkey Zetterland, who attends weekly therapy, is a washed-up actor, turned writer, who is working on a new script entitled The Red Car. For the last few years Monkey has been living off of his residual checks and his mother. It seems he can't make a go of anything, until finally an odd chain of events changes his life and the lives of all those closest to him. Two terrorists move into his building and befriend Grace, Monkey's gay activist sister. While Grace becomes more and more involved with the terrorists, Monkey must contend with his relentlessly nagging, actress mother, his unfaithful girlfriend, another girl who continuously follows him around, and his hairdresser brother. One day Monkey returns to his apartment to discover that it has been ransacked and that his script is missing. We soon discover that the script has been stolen by Bella, an obsessive fan of his mother's. Bella shows up one evening with the script in hand and a gun in the other with the intent of killing Monkey's mother. We watch as all the pieces of everyone's lives come together in one climactic moment.

Monkey has a pet dog, Sarah, who is present in many scenes throughout the film. In one scene Michael, Monkey's dad, has returned home for a visit after his long separation from Monkey's mother. Michael owns a pet parrot, Joey, who is seen on his shoulder. Micheal leaves Joey upstairs while watching television with the family. All of a sudden there is a loud screech emanating from the room upstairs. They all run to investigate and, when they open the door, they find Sarah sitting in the middle of the room, wagging her tail, with green feathers hanging out of her mouth. Upon seeing them, she burps. In reality, the bird and the dog were never actually in the room together. Fake feathers smeared with small amounts of dog food were placed around the dog's mouth, causing him to lick at the feathers, and the screech and burp were added in post production. In the scene when Bella is attempting to kill Monkey's mother, she pulls the trigger, but misses, hitting the dog instead. Sarah is seen lying in the middle of the street, blood covering her face and head. This scene was shot in cuts. The dog merely does a lay down on her trainer's verbal cue after stage blood had been placed on her fur. The dog was not actually shot. The dog recovering from her wounds, is seen later with bandages on her head. For thus scene gauze was merely placed around the dog's head which caused her no discomfort. Sarah is also seen being walked on a leash, eating at the dining room table, and being fed a cookie. Joey is also seen eating a cracker.