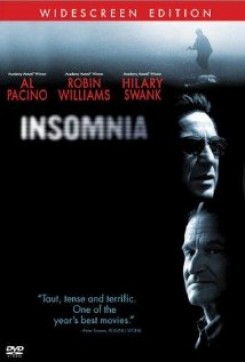 Acclaimed city cop Will Dormer (Al Pacino) is sent to a small Alaska town to investigate the murder of a young girl. Things go awry when Will accidentally kills his partner and is blackmailed by the sadistic killer who witnessed it.

Detective Will Dormer discovers a dead dog in an alleyway. The dog was a fake prop.

Two enthusiastic dogs greet Will as he enters Walter's (Robin Williams) apartment. The pooches sniff around as Will inspects the apartment. Soon, the dogs run to the door and sniff as the camera reveals that Walter is standing on the opposite side. Later, the dogs are seen lying on the floor watching Will. To achieve this action, trainers cued the animals from off camera and rewarded them amply with treats.

Walter's two dogs stand outside his house and one barks at a man as he passes. Will drives up and passes the dogs, which are now standing in the yard. After clearing the yard of any harmful debris, trainers placed the dogs on their marks and kept them in position by tying them to gentle tethers.

The camera follows a bird in flight. The bird was filmed in its natural environment and was not a hired animal actor.