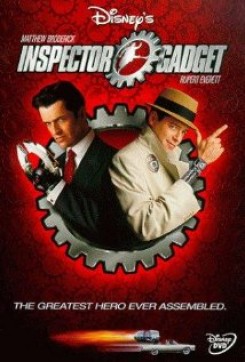 There is a dog, Brain, and cat, Sniffy, appearing throughout the film. Brain is in several scenes, doing very mild behaviors such as riding in the Gadget mobile. For all of the canine's scenes, the trainer placed the dog on its mark and cued it with verbal and hand commands with a food reward. Sniffy is in several scenes with Scolex, the evil scientist, sitting in his car, on his desk, and jumping up on a desk, grabbing a donut and running away. For all of these scenes, the trainer placed the cat on its mark and cued it with verbal, hand and clicker commands with a food reward. For a stunt where Gadget tosses a dog into the air and catches it on its way down, the scene was shot in cuts in front of a green screen. The trainer tossed the dog into the air about two to three feet over a safety net. The dog had been prepped for the stunt prior to filming. In post production these shots are composited into footage of a location where Gadget was filmed separately. Brain is also seen riding in a backpack, but it took a real and fake dog to film the scene. A real dog was filmed to establish the placement of the dog in the backpack and then replaced with a fake dog. For the scene where a tarantula crawls out of a man's mouth, the trainer placed the tarantula on its mark and retrieved it at the completion of the scene. When Scolex drags Brenda, Gadget's girlfriend, to the helicopter, he is also holding Sniffy. This scene was shot in cuts. One trainer handed the cat to the actor. When we see the cat scurry under a helicopter seat, a second trainer hid behind the helicopter and used a clicker to cue the cat to crawl A to B. All of the scenes, which involved the real cat, were accomplished with the helicopter in a stationary position. A fake cat was used whenever the blades were in motion. Later in the film, Brain grabs Scolex pant leg and pulls on it supposedly trying to bite him. This scene was shot in cuts and a trainer doubled for the actor. In the scene where Sniffy and Scolex parachute from the top of a building, a real and fake cat were used. The real cat was filmed to establish the action and then replaced with a fake stuffed cat. When Sniffy and Scolex then land in the back of the Gadget mobile a "gadget" cage encloses Scolex leaving Sniffy sitting in the back seat. The trainer placed the cat on its mark and cued it to stay with verbal commands while the trainer remained outside the car. Other minor animal action consists of a kitten drinking milk out of a cup, Brain watching TV, a squirrel jumping at the sound of an explosion, which was a sound effect done in post production, and a computer generated bug supposedly being spattered on a car windshield.