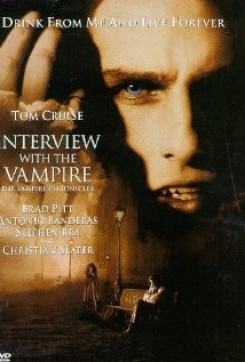 Interview With The Vampire

Interview With The Vampire is a drama based on the best selling Anne Rice novel of the same name. When a reporter encounters an unusual young man in a New Orleans alley , he convinces him to be interviewed. The tale that unfolds is the confession that the young man, Louis, is a vampire. In flashback, Louis reveals the shocking truths about his life, how he came to be a creature of the night, and the moral and physical struggles he has coped with as a result. His story begins in 1791, in New Orleans, when Louis has lost all will to live. He is a young plantation owner who is bereft at the loss of his wife during childbirth. As he gambles and takes risks because he no longer values life, he is observed by a stranger named Lestat. One night Lestat follows him to the docks and attacks him. Later Louis encounters Lestat again and agrees to become a vampire although he has yet to learn what this "rebirth to darkness" really means.

Throughout these opening sequences there are numerous background horses pulling carriages and wagons. The action is very mild and serves to create the period atmosphere with professional wranglers providing the wagons and acting as the drivers. As Lestat educates Louis to the needs of the vampire for human blood, Louis is repulsed by the idea that he will now be a killer. In one scene when Lestat and Louis are at dinner, where neither can really eat food, Lestat shows Louis that in desperation vampires can live on the blood of animals as well as humans. Louis uses this alternative for a long time since he cannot accept becoming a murderer. During the dinner scene, Lestat reaches to the floor and picks up a live rat, bites its neck and drains its blood into a wine glass for Louis. Lestat throws the dead rat onto the table and later onto the floor. This scene was shot in cuts. A trainer placed the live rat on the floor and the actor merely picked it up and held it. When Lestat is seen biting the neck of the rat it is a fake rat that is used. There are several subsequent scenes where dead rats are shown, ostensibly killed by Louis for his own survival, as well as a scene in a hen house where Louis has killed chickens for the same purpose. For these scenes fake rats were used. The chickens had died of natural causes in a poultry house and were purchased frozen and used in this scene. Lestat teaches him that it is better to seduce the rich and takes Louis to a gala introducing him to the decadent creatures on which they will feed. As Louis walks an old dowager in the garden with her two poodles, intending to kill her, he is overcome with disgust and kills the dogs instead. This scene was shot in cuts and we see the dogs barking at Louis as he seduces the old woman. Another shot is of Louis as he yanks at the leash. The aristocrat is seen screaming and the camera cuts back to one dog lying dead and Louis holding the other dog and sucking at its neck. The dogs are not seen being killed by Louis and the dead animals that are seen were fake prop dogs. When the live dogs bark at Louis they are responding to the verbal commands of the trainer. Later, while they are living in New Orleans, there are several scenes in which Louis roams the deserted streets in which many rats scurry around. Louis is seen grabbing a rat and putting it in his mouth. For these scenes a rat wrangler placed the rats on the set and the rat that is grabbed is actually a fake rat. As he walks on, he encounters an abandoned child, Claudia, who is turned into a child vampire by he and Lestat. Claudia grows to hate Lestat for turning her into a vampire, a child suspended in time, which means she will never reach womanhood. She plots to kill Lestat and uses two poisoned twin boys to lure him into drinking the blood of the dead. She and Louis take Lestat's body to a swamp to dispose of it and here we see an alligator slither into the merky water. For this scene a trainer placed the alligator on the bank and the animal naturally gravitated into the water. Louis and Claudia then plan to move to Europe and in packing up the house they also plan to free two birds in a cage. For this scene the trainer placed the birds in the cage and they were never actually freed by the actors. Lestat however, is not dead. He returns to punish Claudia, but Louis protects her and throws an oil lamp at Lestat's feet which starts a great fire that burns much of this quarter of New Orleans. From the ship on which they escape, Louis and Claudia look back at the burning city and see riders on horseback galloping on the high bank at the waters edge. For this scene a road was built up at the waters edge fifty feet in front of the burning buildings. Smoke machines provided atmosphere and the fire itself was controlled by the special effects technicians using butane lines. The horses ran from A to B on this elevated road and at no time were they near the flames. Louis and Claudia travel the world but end up in Paris where Lestat first became a vampire. There they encounter vampires who pretend to be humans acting as vampires. They ultimately kill Claudia for killing Lestat, one of their own. Avenging her death, Louis burns the vampire lair and escapes with the leader, Armand, in a horse drawn carriage. Without regret he leaves Armand and eventually ends up in New Orleans again in 1988. For this scene the carriage moves from point A to B driven by a professional wrangler and the fog that is seen is created with fog machines. Back in New Orleans he finds a dilapidated mansion with many dead rats on the steps and porch. There he finds Lestat, undead and surviving on the rats. As in earlier scenes with dead rats these are fake props. Louis leaves Lestat and the action cuts back to the interview which began the film. Although Louis cannot harm the reporter, his fate is unfortunately sealed since he now possesses the truth about vampires.