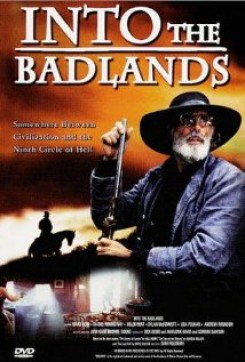 Into the Badlands is a trilogy of Western tales told by a bounty hunter in a style reminiscent of Rod Serling's Twilight Zone. These stories take place in the 1870's and each story follows the trail of a bounty hunter who changes the lives of the people he meets while relentlessly pursuing an outlaw. In each story there's an element of the macabre and super-natural. In the words of Barston, the bounty hunter who narrates throughout the film, the Badlands are "places where sensible men never venture...where phantoms walk...way-stations somewhere smack between civilization and the Ninth Circle 'A Hell". The first story follows the trail of John McComas, a fugitive with five hundred dollars being offered for his capture. Sheriff Starett is personally out to get McComas for shooting his brother after he caught McComas stealing a horse. McComas is tired of running and falls in love with a prostitute he meets in the town saloon. The two make plans to meet after dark and escape across the border to a new life in Mexico. An encounter with Starett alters their plans. The second story involves a bizarre bonding that forms between two very different women under harrowing circumstances. Alma, a simple pioneer housewife, rides to the Carstairs' homestead to visit Sarah Carstairs. Sarah's husband had to leave suddenly to see his dying mother in Boston and Alma has promised him she would look in on his wife. The Bostonian woman is patronizing to simple Alma and before long accuses Alma of having an affair with her husband. It is obvious that Sarah is ill, both physically and mentally. Apart from her accusations, she keeps warning of wolves, and before long a wolf appears at their window. The third story is the most violent. Barston, the bounty hunter, is obsessed with tracking down a half-breed Indian named Red Rountree, who has raped and killed a young socialite from a prominent Denver family. The family has offered a bounty of $5,000 dead or alive. He is so obsessed at getting Rountree, that after he shoots him, he lies down next to the dying man and talks him to death. He then loads the dead body onto a wagon but his monologue to the corpse continues. He must verify that he shot the right man, so he stops at a saloon in a ghost town for verification. However, the men there say he didn't shoot the right man, it was a case of mistaken identity and the real Red Rountree is going to come riding into town. Barston is determined to collect his reward and refuses to part with his prize corpse.

In the film's opening sequence sheep are milling about when a shot rings out and one is shot and can be seen lying on it's side stained with blood. This sequence was shot in cuts, using a purchased dead ewe. The live sheep were filmed first, with the sheep being released from a pen and running to another pen where they were fed by wranglers out of camera range. The purchased dead ewe was then positioned on the ground and fake blood was applied to it's fur. In the second story with the two women, wolves surround and attack their homestead. One wolf first appears at the window. Then a wolf crashes through the glass window. Alma fires at the wolves and two dead wolves can be seen lying on the ground outside. There are more close-up shots of a snarling wolf with a lot of quick shots of an attacking wolf, and Alma shoots again. The wolf attack scene was shot in many cuts. Close-up shots of the wolf's head were accomplished with the use of a mechanical or articulated wolf's head. Two wolves were filmed prowling a fenced in area of the set. To get them to jump through the window, food was tossed onto a bench on the other side of the window and they merely jumped through the open window frame to collect the food. The articulated wolf head was used to break through the candy glass window. At no time was there any actual contact between the wolves and people. For the shot of the two wolves lying dead on the ground, wolves were sedated by a veterinarian. The blood on them consisted of corn syrup and food coloring. They were under sedation for a total of five to eight minutes and revived with no ill effect. Our American Humane representative was present throughout. For a scene in which horses run across a shallow river bed, horses were released from a penned in area on one side of the river bed and ran to a grazing area on the other side. The obsessed Barston carries his prized corpse first on the back of a wagon, then, as time passes and as both he and his horse are dehydrated and sun struck, he leaves the wagon behind and places the corpse across his horse's back. He is staggering in the blistering desert sun and his horse can go no farther and falls over. A trained falling horse accomplished the fall in deep sand, which cushioned the fall. Water and dirt were applied to the horse to simulate sweat. Shaving cream was applied to the horses mouth area to simulate foam. Of course, being a Western, horses are seen throughout, either being ridden or pulling wagons. Other animals seen briefly, primarily as background, are dogs, a lizard and a tarantula.