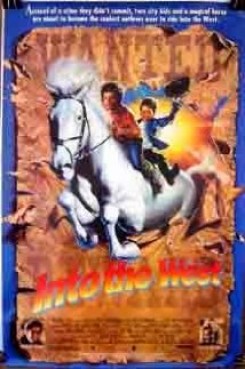 Into the West is the touching story of two young boys in search of an easier and simpler life. John Rielly, who's wife, Mary, dies while delivering their second child, has been forced to bring up the two boys, Tito and Ozzie, by himself. This has become an increasingly difficult task as John has turned to the bottle to help drown his sorrows. The young boys basically fend for themselves, spending a lot of time with their grandfather, a "Traveler". Their whole family has stemmed from Travelers, who are similar to Gypsies, but when Mary died, John decided to settle down with the boys. One day the grandfather returns to camp with a beautiful white stallion following him and his wagon. No one is able to come close to the animal except for Ozzie, the youngest boy. Around the campfire that evening the story of Teninok is told. Teninok is an old myth about a land of eternal youth, with the hero having a beautiful white stallion. Ozzie believes this story and names the white horse Teninok. That evening the boys bring the horse home to their apartment. It isn't long before the authorities come and take the horse away from the boys, as horses are not allowed in the building. When John goes to the courthouse to get his boys' horse back, he is denied the horse and is threatened by one of the policemen. We soon find out that the policeman that threatened John has actually taken the horse and sold it to a wealthy horseman. Ozzie and Tito are crushed when they realize that their horse is gone and are determined to get him back. One day as the boys are in the local store, they see their Teninok on television being groomed for a prestigious upcoming event. The boys take off to the stables where their horse is being held and proceed to steal him back. Unfortunately, they have been video taped in this act and now the whole town is turned up-side-down in search of the boys and the prized horse.

Animal action is throughout this period piece as the story revolves around the horse, who is ridden much of the time. In the beautiful opening and closing scenes Teninok is seen galloping up and down the waters edge on the beach at dusk. In one scene several riders are trying to get their horses to jump over a bonfire in the campsite. All of the horses approach the fire but refuse to jump. Teninok, who has been standing at a distance, suddenly bolts towards the fire with Ozzie on his back. He gallops across the campsite, jumping and clearing the bonfire. When the boys take Teninok to the apartment, they ride the horse into the elevator and transport him to the second floor, where he exits the elevator and enters the apartment. One of the neighbors calls the authorities on the Riellys' and reports them for having a horse in the apartment. When the authorities arrive, they storm in and try to take the horse. They also try to administer a tranquilizer to the animal. Teninok goes wild. He runs around the small room in circles, whinnying, rearing, jumping up on the furnishings and breaking them, and finally kicking out one of the walls with his back feet. Ozzie is finally able to control the animal, who is lead out of the apartment building to the waiting police transport vehicle. Teninok gets half way up the ramp, then turns around and runs in the opposite direction, jumping over a police car that is in his path. Again, Ozzie sooths the horse and he is taken away in the police vehicle. In one scene the boys are riding through the countryside on Teninok when they see several fox hunters on horseback with their dogs on the horizon. The boys take off, believing that the men and dogs are after them. They run in and out of the trees, jumping and leaping, finally stopping to hide in the branches of one of the trees. The dogs approach the tree and begin barking excitedly. The camera pans to the left where we see that the dogs are actually barking at a fox in the very same tree. The fox crawls out on a branch and darts off, escaping immediate danger from the hounds and allowing the boys and Teninok to escape also. As the boys continue on their journey, they stop in a small town for some rest and nourishment. They aren't old enough to rent a room so they come up with a plan to sneak into the movie house after it has closed and sleep there. Ozzie goes into the movies, leaving Tito and Teninok outside until everyone has gone. While Ozzie watches the movie, a storm moves into town forcing Tito and Teninok to weather the elements as they wait for their relief. Ozzie is finally able to let the waiting pair into the theater. Once they are inside they proceed to raid the snack bar. The three of them eat popcorn and watch movies until they fall asleep. When morning comes, a woman opens the theater. This awakens Teninok, who is lying on the floor asleep. He whinnies and nudges the woman who screams, awakening the boys. Tito and Ozzie jump on Teninok's back and they flee the movie house. As they run down the streets of the town, they jump over a baby carriage being pushed by a woman. They make it out of town safely, only to find that they are being pursued by men with tracking dogs and men on horseback. A chase ensues and the boys and Teninok find a hiding place under a waterfall at the top of an incline. The boys stay there until the men retreat. They sneak out of the waterfall only to realize that they are being searched for via helicopter. The helicopter circles the wooded area where they are hiding and finally catches a glimpse of them. Teninok bolts out of the woods and up a steep ridge. They are surrounded by a steep drop. The helicopter moves away and Teninok heads for the ocean. The chase is now on. Police cars, helicopters and men with dogs are all after them. Teninok, with Ozzie on his back, heads straight into the water. He swims out until he can no longer be seen. You see a woman's hand in the water saving Ozzie and you realize the spirit of the boys' mother had been in the horse. In one closing scene Teninok is seen through the flames of a burning wagon like a vision. Other animals are seen briefly throughout the film. This was an Irish production shot in Ireland, so American Humane had no jurisdiction in this production and was not on the set. All of the stunts in this production have been done sucessfully in American films without harm or discomfort to the animal. However, we were particularly concerned about the ocean scene and, while we know it is possible to do these stunts humanely, we were never able to verify how they were accomplished, despite our many attempts. Therefore, we are rating Into the West "Questionable."