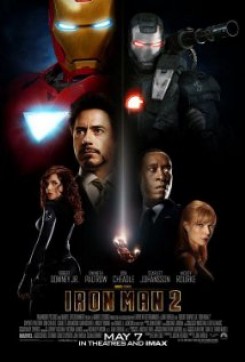 After spending several years protecting the world from crime, publicly known superhero Iron Man is suddenly forced to fight a villain who possesses his own technology for evildoings. When the military tries to seize the technology, Iron Man and his allies fight to keep it covert so it doesn't land in the wrong hands.

Throughout the film, Ivan (Mickey Rourke) has a pet cockatoo, which is seen perched on mechanical equipment, being fed by an actor while perched on the actor's knee and sitting on the actor's shoulder. All of this was mild action for the well-trained bird, and the actor (who also owns a bird just like this one) was instructed on the bird's proper handling. Trainers cued the action using hand signals and verbal commands. All perches were secured, and cages were inspected and made comfortable. All grounds were inspected for hazards and sets were closed and secured. All food and beverages fed to the cockatoo was deemed safe for consumption. The bird was rested and given treats between takes.

The cockatoo's wings were clipped, which is customary for the bird's safety; it limits or eliminates flight. For scenes in which the bird is seen reacting to a loud noise or commotion, this behavior was trained — trainers cued the bird to "dance" or rigged the perch to move, which encouraged the bird to jump off.

The cockatoo was unfazed by noises on the set and by welding performed in one scene, which was kept a safe distance from the animal and filmed only briefly. The bird was not actually present during any of the "electric whip" effects — editing only made it appear that way.

The scene in which the security guard appears to snatch the bird off the actor's knee and stuff it into a bag was filmed in separate shots. The trainer played the role of the guard and grabbed the bird with caution. Then the cockatoo was replaced with a stuffed prop. Finally, the bag that the costumed trainer held contained a special effects mechanism that moved via remote control.

For the scene in which a seagull is seen perched on a table and on debris in a windowless room, the bird's leg was attached to a monofilament line controlled by trainers and it was allowed to do whatever came naturally, including pecking at treats that had been placed around the set.