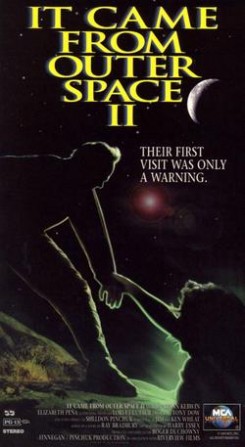 It Came From Outer Space II

It Came From Outer Space is a science fiction film which centers around a mysterious occurrence in the California High Desert. When photographer, Jack Putnam, enlists the help of a local boy, Stevie Fields, in finding desert locations for his work, they both find themselves overwhelmed by a freak storm. An unusual rock-like formation is left in the wake of the storm. What initially appears to be a geologic oddity, turns out to be an alien life-form that impacts the desert community in frightening and fantastic ways. As the rock formation begins to grow at an unbelievable rate, the local water sources start to dry up, the desert heat increases beyond livable proportions and members of the community, as well as desert wildlife, start to disappear. When these victims reappear, they are violent and have the demeanor of zombies. When Stevie's mother falls victim to the alien life-form, we learn she and the other victims have been cloned. It is through Jack's courageous attempt to save her that the true nature of the aliens is revealed, along with the need to free themselves and planet earth.

After the alien mound appears, we see a coyote approach the mound as if curious. He howls and then gets sucked into it by an Unknown force. This scene was shot in cuts. When approaching the mound, the animal responded to his trainer's voice and buzzer commands. To get the coyote to howl, the trainer duplicated the sound of a coyote howling and the animal merely howled back in response. When we see the animal being pulled toward the mound, a special harness was used. As the trainer was able to gently pull the animal toward the mound, the coyote resisted, simulating a struggle. As the story unfolds, we learn that the cloned versions of both man and animal always seek to retrieve the strange blue rocks that are part of the alien landing, as is the mound. In one scene, we see the coyote standing on a high rock and then leaping through the window of Jack's moving vehicle. The animal is thrown from the back seat into the dash board and is wounded by Jack's tripod which is stored in the front seat of the car. We see a blue alien substance ooze from the animal's wound and then the coyote morphs into the blue alien rock that Jack has been carrying on the floor of the car. This scene was shot in cuts with both a live and a fake coyote being used. For the leap, the live animal responded to his trainer's command and jumped from point A to point B. When the coyote is seen going through the window of the vehicle, a fake animal was used. When the animal is seen leaping over the seat of the vehicle, the trainer had placed food on the floor of the vehicle and then had given the animal a buzzer command. A fake animal is used for the wounded coyote and the morphing was done digitally in post production.