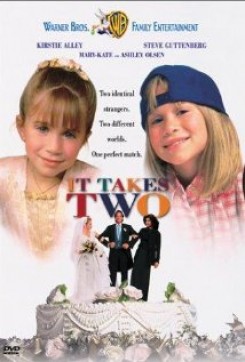 It Takes Two is a comedy about two very different little girls who look exactly alike, but come from completely different backgrounds. Amanda Lemmon is nine years old, feisty, street wise and an orphan who lives at the East Side Children's Center in New York City. Diane Barrows is a case worker at the center who loves Amanda very much. They both would like for Diane to adopt Amanda. However, the authorities think she should go to a family. A family is something that Amanda and Diane want very much, but until Diane finds the love of her life, "that home-run, hit it out of the park feeling" kind of guy, then Amanda will have to stay at the orphanage. Alyssa Callaway is also nine years old and the pride and joy of her father, Roger Callaway. Roger is a successful businessman that has completely spoiled and pampered Alyssa all her life. Alyssa is the only thing in her father's life, besides his business, that has meant anything to him since her mother's death several years earlier. Unfortunately, he has been busy running a multi-million dollar corporation and has not been able to spend as much time with Alyssa as they both would have liked. Therefore, Roger comes to the conclusion that Alyssa needs a mother, and he chooses an ambitious socialite, Clarice Kensington, who unbeknownst to Roger, hates children. Fortunately for Alyssa, Roger decides that the three of them should spend the summer together, getting acquainted at the Callaway's lakeside vacation home in upstate New York. Across the lake from the Callaway mansion, the children from the East Side Children's Center are spending the summer at Camp Callaway. As luck would have it, Amanda, the street urchin, and Alyssa, the heiress, come face to face in the woods between the camp and the mansion. The two girls are somewhat shocked when they look at each other and feel as though they are looking in a mirror. After talking, the girls discover that they have similar problems, Amanda needs a "real man" for Diane and Alyssa needs a "real woman" for her father. With the two looking alike, they decide to switch identities and try to bring Roger and Diane together before Clarice can drag Roger to the altar. The girls finally get the two adults together during a horseback ride and the sparks immediately ignite. In the next few days while Roger and Diane are getting acquainted, Clarice realizes what is going on and moves up the wedding date. It now becomes a race against time, and finally a race across the city of New York for Alyssa and Diane to get to the church and stop the ceremony.

There is a scene when Alyssa, posing as Amanda, takes Diane out horseback riding. After a sudden movement by Alyssa, Diane's horse gets spooked and rears, taking off across an open field. Meanwhile Amanda posing as Alyssa, is out riding with Roger and he sees the runaway horse and rider. He immediately goes to the rescue and rides up alongside the horse, stopping him. For this scene a trick rearing horse was used with a wrangler as a stunt double. The area had been cleared of any debris and low hanging branches prior to shooting and the horses were walked through the scene before filming. The same day while riding back to the stables, Roger rides through some trees and gets hit in the head by a low hanging tree branch, knocking him off of his horse. The horse was merely walked up to the hanging branch. The branch was just low enough to touch the actors forehead and at the same time not low enough to make contact with the horse. A wrangler, doubled for the actor and did the actual falling from the horse. In another scene, Diane and Alyssa are in New York trying to get to the church and stop the wedding. In doing so, the two steal a horse and carriage, driving it through the streets of the city. When they reach the church, Alyssa and Diane come to a galloping stop. For the shot of the horse galloping down the street, two complete intersections were closed during filming, stopping all traffic. A wrangler was hidden inside the driving area of the carriage. He used cable reins to actually drive the carriage himself, letting it appear as though the actress was driving the carriage. In the closing scene, Roger and Diane get into the carriage and are driven away at a trot by the carriage driver. Once again, the wrangler was hidden in the driving area of the carriage with cable reins driving the horse as the actor held fake reins, appearing as though he was driving.