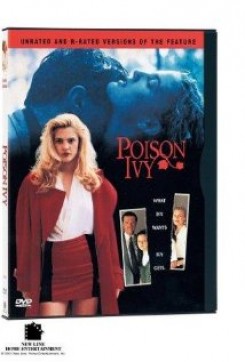 Ivy is a muddled melodrama involving envy, obsession, lust and murder. The central character of Ivy is either a "bad seed" or a precocious Jezebel as little explanation is given as to what makes this teen terror the way she is, which is the personification of evil. She is an outcast new girl at school when she is befriended by Sylvie, a lonely troubled teen who is fascinated by Ivy. The impoverished Ivy seizes the opportunity to attach herself to Sylvie's wealthy parents by being a friend to their friendless daughter. Before long Ivy becomes a confidante to Sylvie's chronically ill and suicidal mother and becomes sexually involved with Sylvie's father. She even attempts to steal the affections of Sylvie's dog, Fred. By the time this viscious little vixen is stopped she has succeeded in destroying the lives of all she has touched. An opening scene shows teens hovering around a dog lying in a pool of blood in a road. The dog has apparently been hit by a car and one of the teens suggests that someone should just kill it. With little warning, Ivy reaches for a fallen tree limb which she lifts over her head and heaves down hard as a thud is heard. (No contact with the dog is seen) The dog-actor had stage make-up on him to simulate injuries and was merely lying on his side. The "pool of blood" was actually Karo syrup.

Sylvie's dog Fred is seen at various times in mild action such as greeting Sylvie when she comes home from school. In one scene Sylvie insists on testing Fred's loyalty after she accuses Ivy of stealing his affections. Fred is placed midway between the two girls as each calls to him. The deceitful Ivy cheats by tempting Fred with a hidden dog biscuit. For this scene the dog-actor was actually listening to his trainers who were out of camera range calling to him.