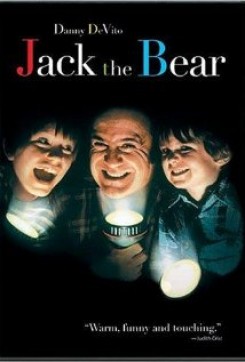 Jack the Bear is an engrossing melodrama about a recent widower and his two young sons and how they deal with their grief. It is also about how the forces of bigotry, hatred and anger only breed more of the same and how those forces can effect the lives of ordinary people. Told from the point of view of Jackie, the 12-year-old son, the story has strong moments of humor and suspense. Following the death of his wife, John Leary moves with his sons, Jackie, and three-year-old Dillon, to a new home in a blue-collar neighborhood of Oakland California. John has gotten a job as the humorously goulish host of a T.V. horror movie show. One of their neighbors is a strange Nazi-loving bigot who walks with a limp and the aid of a cane. His name is Norman, but the neighborhood children always refer to him as The Zombie, and they taunt him in various ways. When Norman gives a young neighbor a Nazi uniform to be used as a Halloween costume, John reacts and is nearly fired after he delivers a drunken anti-bigotry monolog on T.V. Norman's old dog, Cheyenne, is found dead from poisoning on John's front lawn and although John apologizes to Norman and says he did not kill Cheyenne, the animosity between the two men continues to mushroom.

There are some intense scenes of animal action in Jack the Bear. American Humane was on the set, not just for filming, but also for training of the animals. For the scene in which Cheyenne is found lying dead on the lawn, a fake double was used. The dog's back was always to the camera. Since Cheyenne was supposed to be blind in one eye, the dog was fitted with a contact lens by an opthamologist. The dog was comfortable with the lens and did not seem to mind wearing it. Proper sanitary conditions were met and restrictions were followed regarding the amount of time the dog would wear the lens. Four aggressive, snarling and growling Dobermans are kept in the yard next to the Leary home. The dogs are seen at various times growling and barking viciously. This was accomplished by verbal commands and food rewards from the trainers. When Jackie punishes his kid brother by putting him close to the fence with the barking dogs, the trainers were behind the fence giving the dogs verbal commands. For the tense climactic scene where it's Norman versus the attacking Dobermans, the scene was shot in many cuts. When the dogs look up and bark at something in the tree, two trainers were in the tree calling to the dogs and rewarding them. Six trainers were on the ground releasing and retrieving the dogs between takes. When Norman falls to the dogs below, a stuntman was the photo double for the actor. The stuntman had bacon pieces hidden in his clothing The dogs rummaged through his clothing looking for the bacon pieces and, thereby, simulating an attack.