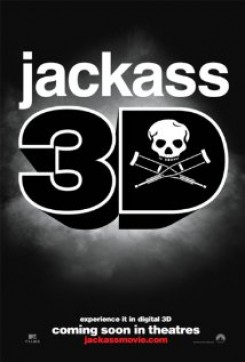 Cast members from the MTV show hit the big screen once again for a movie filled with gross-outs, juvenile pranks and wild stunts.

Several scenes involved mild action, including a dog on a leash, a trained parrot on a man's shoulder, a donkey standing still and kicking a man behind him, and a pig eating an apple from a man's rear end. For these scenes, trainers placed the animal on its mark and cued the action using commands (with the dog, for instance), bait sticks (with the pig), or hand signals (with the donkey).

Hundreds of bees are shown. In actuality, only a handful of bees were used — the rest were computer-generated. Beekeepers then shake bees into an open-ended makeshift ball prop, which the actors hit around a pole, as if playing tetherball. The men smacked the ball around while a few bees buzzed nearby, and they were cautious not to touch any of the bees. The actors pretended to be stung — the bees and humans did not interact.

A man pulls out a handful of live snakes from a bin and shows them to the camera before tossing them into a pit inside a truck. A crew member falls into this pit and overreacts to the snakes around him. This scene was filmed in separate shots using a combination of stunts, fake scenery and rubber snakes. The action did not actually take place in a truck, but on an outdoor set with wood panels decorated to look like the sides of a truck. Trainers placed 20 snakes into large trash cans, which were clean and had been checked for hazards beforehand. Trainers also placed a few live snakes on the "ground" of the pit and let them slither around. Trainers stood nearby with snake hooks and retrieved the reptiles right after filming. The crew member who appeared to fall into the pit actually fell into a fake pit filled with rubber snakes. For part of this scene, the head trainer used a special training technique to get one of the snakes to strike at the camera. The man seen with an albino python was a costumed trainer.

Steve-O holds a scorpion by its tail and sets it in a diorama. The actor was well-rehearsed on how to hold the scorpion, while trainers stood nearby and retrieved it right after.

In the end credits, a woodpecker pecks at a wood cast around a man's penis. A well-rehearsed actor allowed the bird, to be perched in his hands while the bird pecked at the wooden cast, which had been lined with treats. The bird's leg was attached to a monofilament line held by an off-screen trainer.

For the scene in which bulls run out of a chute into an arena to charge an actor, the chute was an "alleyway" type of chute that the bulls were accustomed to running through. In all the bull scenes, trainers and bull wranglers were in the arena the entire time, using standard rodeo "taunting" methods to get the bulls to charge the actors. The shot in which the bull flips Johnny Knoxville was achieved in the same way. The same held true for the little person who is flipped by a charging bull during the end credits. After the bulls charged, the wranglers distracted them while the actors ran out of the pen. All of the bull scenes were extremely well-rehearsed.

American Humane Association Certified Animal Safety Representatives also monitored some action with a cat, a horse and a pony, and some additional dog action, all of which was cut from the theatrical release.

Due to late notification or limited resources, American Humane Association did not monitor any of the parrot or ram action or some of the dog, snake and scorpion action.