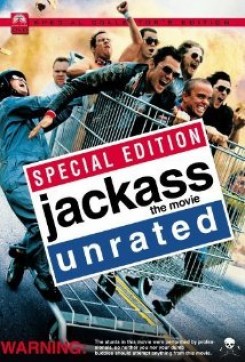 MTV veteran Johnny Knoxville and his daring crew crossover to the big screen with never-before-seen stunts and gross-out gags deemed too nasty for even basic cable television.

AHA was on set to monitor all of the US-filmed animal action featured in this film and can confirm that production followed AHA's Guidelines for the Safe Use of Animals in Filmed Media and showed a great concern for the welfare of their animal actors. However, AHA was not notified of the filming of several scenes involving animals in Japan, including a sequence in which two men take an impromptu dive with sea cucumbers. While AHA applauds the effort made by production to work collaboratively with AHA for the sake of the animals in Jackass, AHA questions the handling of the animals in the sea cucumber scene in Japan and as a result, is awarding the film a dual rating of Acceptable/Questionable. Because of the partial Questionable rating, however, AHA cannot grant the film an end-credit disclaimer attesting that "No animal was harmed..."

A man holds a small alligator up to his chest and the animal bites the man's nipple. A trainer safely removes the alligator.

Several men attempt to walk a tightrope over an alligator-filled pond. The animals jump up to bite the men and one of the men falls into the water. Another man holds food in his pants while walking the tightrope, prompting a gator to jump up and grab the food with its mouth. The alligators were filmed in the pond where they live while the men tempted fate by walking the tightrope that was placed above the pond.

A massive alligator crawls around inside of a house. Trainers brought two full-grown North American alligators and positioned them in safe areas in the residential home.

In the Bull Ring

Johnny Knoxville grabs a dollar bill from between a bull's horns and from off of its rear. Four bulls, named Mighty Mouse, Banana, Outlaw, and War, from Leffen Bull School were on hand for this scene. A professional bull rider rode a bull from the gate into the ring for four seconds and then dove off. Four men entered the ring and tried to grab the money.

One scene that didn't make it to the final cut of the film involves a grown man in a mouse suit and several playful cougars. The man was placed inside of a large cage with two cougars, where he walked and crawled around while the cats batted at him and hissed. The cougars soon grew disinterested in the man, and he left the cage.

In another scene shot for the film, a man risks being mauled by a Bengal tiger named Katie. The trainer released Katie to run up to the actor and knock him to the ground. Several trainers surrounded the area and immediately retrieved the animal.

AHA was also present for the filming of a Jackass: The Movie promotional screening entitled the Jackass Backyard Barbeque. Two chimps named Angel and Cody were also in attendance, and AHA confirms that they were well cared for at the event.

A duck walks briefly beside a man. AHA was not present for the filming of this scene.

While on a diving trip, two men learn that when sea cucumbers are "threatened," the animals emit a white, thread-like substance. The men dive underwater with the animals and vigorously rub them, prompting the sea cucumbers to expel the substance. The substance is actually the animals' internal organs, which can be regenerated but are expelled as a defense mechanism. AHA would not have allowed this particular scene to be shot given the fragile nature of the animals, and since AHA was not on set to verify if the animals survived the experience and, in fact, regenerated their organs, we cannot confirm nor deny that any animals were harmed for the filming of this scene.

In a later scene, two men stuff their pants with worms and dive into the ocean to swim with whale sharks. The sharks bite at their pants. AHA was not present for the filming of this scene.

A man in a panda suit holds a turtle. AHA was not present for the filming of this scene..

A crab bites Johnny while on a boat. He holds the crab on the end of a stick. AHA was not present for the filming of this scene.