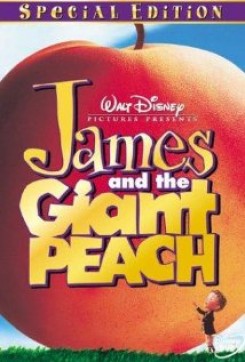 James and the Giant Peach

James And The Giant Peach is a film about a young boy, James Henry Trotter, and his magical trip to New York aboard a giant peach. The film is a combination of human actors who first turn into puppets and are then brought to life with stop motion animation. After the death of James parents, he goes to live with Spike and Sponge, his two evil aunts. One morning while rescuing a spider, his only friend, from the clutches of his fly swatting aunts, James meets a strange man. The man gives him a bag full of magical worms. As James is walking back into the house, he drops the bag at the base of an old peach tree and the worms start to bounce all over the yard and into the ground. The next morning, James and his aunts wake to find a giant peach in their front yard. His evil aunts instantly see dollar signs in this rare find and immediately start selling tickets to the public. One night, while picking up the garbage in the yard, James takes a closer look at the peach. The smell is enticing to his starving stomach so he picks off a piece and eats it. After pulling a chunk out of the peach he sees a glowing tunnel inside and crawls in for a closer look. James gets the surprise of his life when he discovers numerous puppet insects inside and that he too is now a puppet. The insect puppets and James instantly become friends. Upon hearing his evil aunts calling for him, one of the insects chews through the stem of the peach and it rolls over the aunts and out to sea. James and his new friends begin their amazing journey to New York, aboard the giant peach.

The only scenes involving live animals is the beginning scenes with James and a tarantula. All of the rest of the insects are puppets used in stop motion animation. When James first discovers the spider, he is getting ready for bed and sees the web across the window. On closer inspection he sees the lovely spider and holds out his hand. The spider crawls onto his hand and James walks over to the table and lowers his hand to the edge where the spider crawls off. Then the spider crawls onto the chair and back to James' outstretched hand. The actor was prepped prior to the scene with the tarantula. A special net was placed on the floor so if the tarantula fell he would fall onto the net and not the floor. In another scene, Aunt Spike comes into James room and notices the spider on the window and starts screaming. James rescues the spider and makes a mad dash for the door where he collides with his Aunt Sponge and her bug spray. He manages to elude the two women and stumble out of the door, only to collide with Sponge again causing James and her to fall and the spider to land on Sponge's face. Spike swats Sponge's face with the fly swatter. However, the spider is faster and jumps to freedom. James picks the spider up and runs outside, letting it go through a crack in the outside wall. The scene was shot in cuts. When James picks up the tarantula from the window, the actor merely picked it up and put it in his hand. For all of the segments of the actor supposedly running with the tarantula, his hand was empty. In the segment of the tarantula on Sponge's face, the wrangler merely placed the tarantula on the actor's face and retrieved it after completion of the shot. The tarantula was retrieved prior to the segment of Spike swatting Sponge's face. The next time the tarantula is seen he is on the floor, leaving the viewers to believe that he jumped off of her face to safety but, the wrangler merely placed the tarantula on the floor. When James frees the tarantula, he lets him go near a crack in the stone wall around the yard. The actor released the tarantula and it crawled through the crack where a wrangler waited on the other side. In both of the above scenes, to motivate the tarantula to move on cue the wrangler merely used a device full of air and blew it at the tarantula in the direction he wanted it to move.