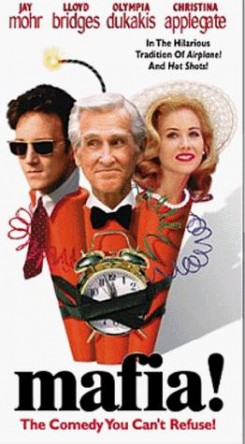 Jane Austen's Mafia! is a comic parody of some of the classic films about the Mafia weaving the story of a Sicilian Godfather and his family.

Throughout the film many real and fake animals are used. Because of the nature of the parody, there is no attempt made to make the fake animals appear real. Scenes that appear to place an animal in jeopardy use fake or animatronic doubles for the real animals. For all the scenes, involving the baboon, the trainer of the baboon was dressed as the character and held the animal by a waist harness as it perched on his head. When the arms of the baboon reach out to strangle Oyster Jimmy, fake baboon limbs were used. For the final scene when the elevator is blown up, the trainer and baboon walk into the elevator and the doors close. The scene was shot in cuts and the explosion is suggested by blowing Fuller's earth out the door and using sound effects. The animal was not on set when the blast was filmed. Wranglers handled the animals. There is a scene where young Vincenzo, later known as the Godfather, encounters some sheep while delivering a package. The sheep run toward him Baa-ing. While retreating from the sheep Vincenzo drops his package, spilling white powder all over the ground. The sheep lap it up and appear drugged; one even appears to be passed out. Trainers release the sheep using a buzzer command and a food reward. For the segment of the sheep lapping up the powder, the trainers placed the sheep in a lay down position and used cornstarch on the animals' noses that gave the appearance of cocaine. To get the sheep to lap up the apparent drugs, grain was mixed in with the cornstarch. The sheep's mouth movements were done digitally in postproduction In another scene, villagers hide Vincenzo in the rear end of a donkey and smuggle him out of town to the docks where the donkey expels him and he catches a boat for America. For this sequence both a real and fake donkey were used. When the villager gets the idea to hide Vincenzo in the donkey, he walks up to the animal and lifts the tail. The scene is shot in cuts and only the head of the donkey is seen during the "insertion" of Vincenzo. A wrangler stood just of camera to verbally cue the donkey and keep the animal on his mark. The actor leads the donkey, carrying lightweight pack baskets, to the docks. When Vincenzo is expelled onto the dock, only the rear end of a fake animal is seen. Fish seen in the background were fake. There is a scene where Don Vincenzo is receiving guests in his office while he sits behind a desk stroking a cat on his lap. When the Don goes to stand, he falls and the cat flies across the room. This scene was shot in cuts using a real and fake cat. The screeching of the cat was sound added in postproduction. Later, the Don appears to light up the cat's tail, mistaking it for a cigar. For this gag, a fake cat's tail was used. When the Don is a young man he is seen working at the street markets where a man offers him a chance to bet on the duck fights. The man is seen holding a duck wearing boxing gloves on its feet. For this, the duck wore specially designed lightweight boxing gloves that were fitted to its feet. The poultry and other animal food products seen in the background were fake props. In another scene, Anthony poses as a magician who almost changes one of the showgirls into a tiger. When the cage is revealed the tiger is seen with the show girl's leg in its mouth. For this scene the tiger was placed in the cage by the trainer and a fake leg was rigged with food to get the animal to hold it in its' mouth. Eventually Anthony falls in love with a showgirl, Pepper, who jilts him for his brother. In the scene where Anthony discovers the lovers, a poodle sits in a chair and barks at him. The dog runs into the bedroom and jumps onto the bed. In anger, Pepper throws several objects at Anthony which shatter against the wall - one of them is the poodle. For this scene a real and two fake dogs were used. The scene was shot in cuts and the actress threw a fake stuffed dog while a second glass fake dog was used to shatter against the wall. The trainer used voice commands and food rewards to get the live dog to bark, run and jump onto the bed. After Anthony leaves the bedroom, a pigeon flies in and appears to perch on his brother's legendary erect penis. A long wooden pole was placed just out of camera range and the pigeon was released by the trainer and trained to fly to this perch. Other animal action consists of a scene early in the film where the atmosphere in a town village is alive with chickens, sheep, goats and donkeys. These animals were tended by wranglers standing just off camera or by wranglers dressed in period costumes as extras. There are some draft horses on the docks in New York. The horses were handled by their wranglers. During a funeral, a horse in the crowd starts vomiting. The projectile vomit was accomplished by using a fake horse's head, which spewed green liquid.