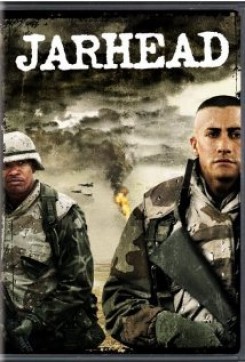 Adapted from the best-selling 2003 memoir of the same name, Jarhead follows third-generation soldier Anthony Swofford (Jake Gyllenhaal) from boot camp to active duty during the Gulf War. "Swoff" and his fellow Marines swelter on the Middle East's desert battlefields, struggling against the always elusive Iraqi soldiers as they fight to the death for a cause none of them seems to fully understand.

One scene shows a fight between two scorpions as soldiers look on, betting which will win. A soldier picks up one of the scorpions and puts it in a wooden match box after the fight is over. The trainer discussed the handling of the scorpion with the actor, and only four takes were required to achieve the action.

To set up the fighting sequence, two live, non-aggressive scorpions were placed in the homemade arena and they simply passed each other without ever making contact. The actual fighting was created through the use of computer generated images (CGI).

In a brief scene, explosions detonate in the background as a soldier pets a horse. This animal action was filmed on a sound stage in front of a green screen. Non-toxic makeup was used on the horse, and the dangerous effects were added in during post production.

Later, some camels standing with soldiers are led away by their rope halters. Trainers put the animals on their marks and stood off camera to retrieve the camels after the shot.